In Praise of Swag

Every year, I attend a couple of big conferences for work. At every conference, there's tons of free swag--hand sanitizer, water bottles, t-shirts and bags. A little trip to Railroad Park with Jack made me realize how essential all this swag has become to me.

What boy has enough t-shirts?

Who goes anywhere in this Alabama heat without water?

A monster and his boy need lunch! 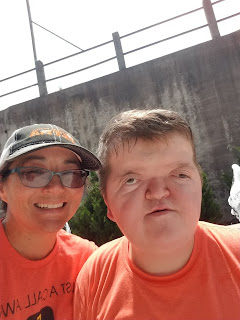 And after all that fun and sweating, a boy needs to change shirts before sitting on his Mama at home. 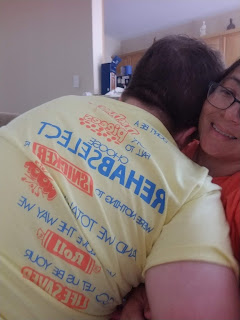 Jack does not believe in schedules....

He inhaled breakfast and asked for his lunch which he inhaled and asked for his after lunch snacks and you know what? I am not going to fight about it. We allow him to eat these foods. Who cares what time of day it is?
And also this is getting me completely off my regular morning schedule and I am not completely freaking out. Progress....but sometimes I do not want progress. I like my schedules 🤓

It's a snow day in Alabama! Satan's dandruff (http://www.nbc.com/saturday-night-live/video/weekend-update-buford-calloway/n45830?snl=1) is expected to fall so we shut down our county just in case. Jack doesn't mind and is even refusing to wear a coat. He consented to wear his fleece jacket though. This child must have some Northern blood in him. 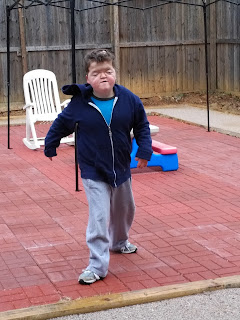 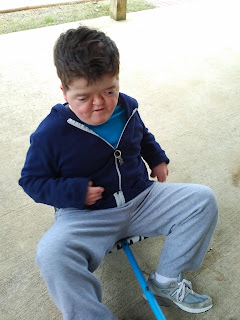 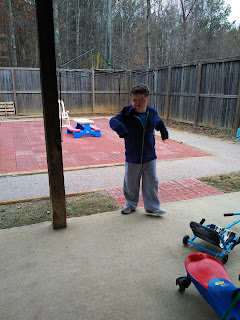 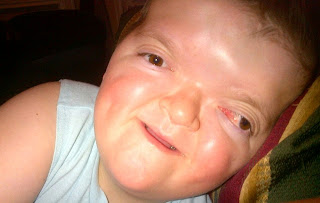 Jack is doing great! He continues to develop at his own pace. I'm rather overwhelmed at the busy-ness that is homeschooling, working, and just hanging out with Dave and Jack. Here's a picture from Jack's 9th birthday yesterday.
Posted by Marie at Wednesday, May 28, 2014 1 comment: 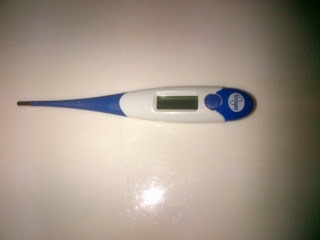 We have so many little friends dealing with very serious things and they all need prayers. It seems a bit selfish to be asking for prayers for ourselves too.

Jack has a mildly elevated temperature today and has been pretty irritable. There are no other definitive symptoms right now. The irritation can easily be explained by the lack of deep sleep for the past ten days as well as recovering from major surgery.

The mildly elevated temperature could be just because he had surgery but 10 days out we should be past that period.

As selfish as I feel asking for your prayers, I know that our God is big enough to meet the serious needs of our friends as well as deal with the anxiety we have going here.

Sent from my Verizon Wireless BlackBerry
Posted by Marie at Sunday, November 04, 2012 2 comments: 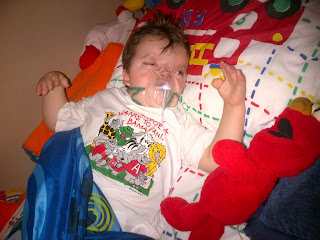 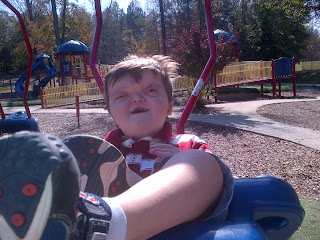 We've been oh so tired since we've been home. Jack has had difficulty sleeping since we got home. Some of it has probably been the usual post-anesthesia sleeping difficulty that we've experienced before and gone a blessed two almost three years without. Also, Jack is not breathing well without his Bipap. We've tried having him sleep on an elevated surface and tried making him sleep on his stomach. None of those things have made much of a difference. The only thing that has made much of a difference is putting him on humidified oxygen. He still obstructs. He still wakes up from the obstruction. He still isn't getting deep sleep. However, his oxygen saturation isn't dropping as low. We have 10 more days before we can begin using the Bipap again. We're over halfway there. God has brought us this far. We have to rely on him to keep us going.

Jack's swelling has reduced dramatically. Overall he seems to feel pretty good. He fatigues a lot more easily than usual and from time to time he complains that his head hurts. The fatigue may be because he's recovering from major surgery. It may be his lack of deep sleep. It might be because he still building up his blood count from the loss during surgery. He's still pretty pale and we're giving him iron to help with that. His head hurting could be all of those and the shunt malfunction.

Dr. Swift has asked to return to Dallas Friday so he can "tap" Jack's shunt and measure the pressure. We'll know if we're continuing to monitor or setting up a next surgery after the appointment Friday.

David and I are both managing to get some sleep again. Today, Jack and I actually were able to get outside for some fresh air and sunshine. It was great!

Sent from my Verizon Wireless BlackBerry
Posted by Marie at Saturday, November 03, 2012 No comments: 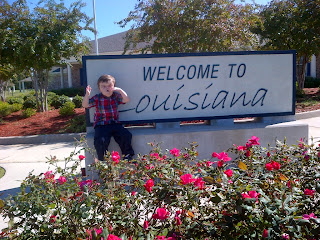 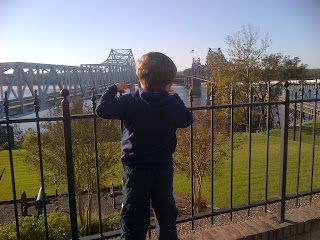 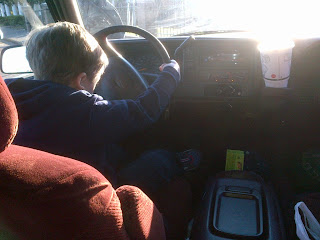 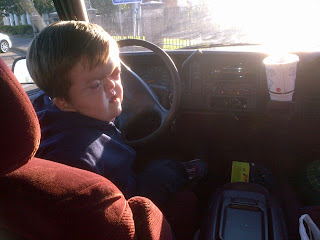 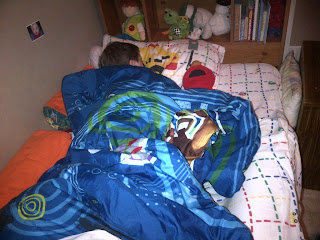 After a long hard day of driving, we're finally home. Please join us in praying that Jack sleeping on his stomach really will make a difference in his breathing. His face may be very swollen in the morning though.

Sent from my Verizon Wireless BlackBerry
Posted by Marie at Saturday, October 27, 2012 No comments:

On Our Way Home 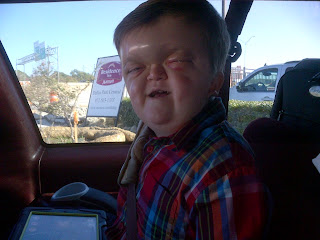 This happy guy was sprung from the hospital yesterday afternoon. We spent a restless night at the hotel and are on our way home. We took two days to make the trip a little more bearable on the way out but we all just want to get home so we're trying to do the whole drive back in one day.

It's been an exhausting week. This whole trip started a couple of months ago when I happened to send a frontal and profile picture of Jack to Dr. Fearon. He was a bit alarmed by the height of Jack's head and the fact that Jack's forehead appeared to be so far recessed. He advised that Jack return for an anterior cranial vault remodeling to make some more room for brain growth to allow for good blood flow to the brain as well as to prevent or stop any increased intracranial pressure issues.

When we got to Dallas and Jack had his MRI, we were surprised to hear from our neurosurgeon that Jack did not appear to have any pressure issues.

Then we met with Dr. Fearon who continued to advise that we move forward with surgery. He strongly believed that Jack needed more room even if the current MRI did not show increasing ventricle sizes. He reminded us that he usually monitor's the kids' optic nerves and monitors for development of sleep apnea to determine timing of cranial surgeries. Because Jack's optic nerves are already severely damaged and he already has sleep apnea, those methods cannot be used with Jack. Ultimately, David and I decided to trust his experience, expertise, and intuition. And we decided to switch to a more proactive neurosurgeon who works more closely and more often with Dr. Fearon.

The next afternoon, we received confirmation that we made the right decision. Dr. Swift said that Jack's shunt was not working properly and the pressure within the shunt itself was high. Apparently, the shunt valve was clogged and while it allowed the ventricles to drain, they were not draining as they should have. Dr. Swift explained that if the shunt was working properly the band of unfused bone just behind Jack's forehead should have fused. This was news to us since our former neurosurgeon was not bothered by the unfused bone. Apparently the unfused bone worked in Jack's favor since it kept things from getting too much tighter prior to the surgery.

Dr. Fearon and Dr. Swift discussed replacing the shunt while they were already operating on Jack but ultimately decided against it because a properly functioning shunt could cause the brain to not move into the newly created space allowing excess room for the brain to bounce around in. Dr. Swift pulled a lot of cerebral spinal fluid out of the shunt and was concerned about fluid building up again quickly in the ventricles causing the brain to be pushed into the space by rising pressure so he would not allow Jack to leave the hospital without another MRI showing that the slow functioning shunt was not allowing too much fluid to accumulate in the ventricles. Fortunately, the MRI yesterday morning showed ventricles that were unchanged in size.

Unfortunately, when cutting across Jack's brow bone to open up the skull, Dr. Fearon cut across Jack's frontal sinuses. The frontal sinuses are not present at birth. They begin developing around age 8 and continue to grow in size into adolescence. Jack's were large enough that Dr. Fearon cut into them and then had to create a flap over the sinuses to keep bacteria from the sinuses from getting into Jack's brain. Dr. Fearon wants Jack to avoid using his Bipap because he is worried the positive pressure will push any bacteria through the flap. The area needs three to four weeks of healing before we consider using the Bipap again.

Jack's breathing was great in the hospital just after surgery but each day we found that he needed a bit more support--more elevation of the bed and oxygen--to keep his oxygen saturation levels where he needs them. Last night at the hotel, he never really got into a sound deep sleep because he would obstruct his airway and that would wake him up.

Now we go home and wait for Dr. Swift to call. He'll let us know whether he wants to tap the shunt after Jack has had a little time to recover from this surgery or whether he just wants to continue to monitor Jack with MRIs to determine when or if the shunt needs to be removed and replaced.
Thank you for all your prayers so far. We continue to need them.

Sent from my Verizon Wireless BlackBerry