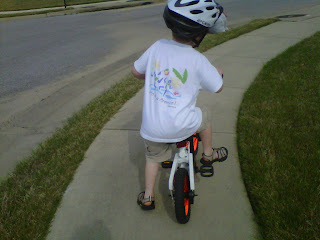 This was *my* shirt. It's faded and soft and apparently very comfortable for Jack. See how he's growing up on me?
Posted by Marie at Friday, March 30, 2012 1 comment: 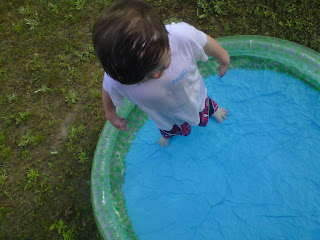 Every year the pool shrinks a little more....
Posted by Marie at Thursday, March 29, 2012 No comments:

I have a reached a state of (relative) calm. BUT I don't know that's it is more about reality or more about how this journey with Jack has deepened my faith and trust in the Lord. I feel almost hypocritical in my present state of lack of anxiety because it is definitely easier to say, "I am not anxious. My faith is in the Lord." when I have no reason to anticipate that Jack will require emergent medical intervention any time soon.

But truly, I feel as if parenting all by itself is a journey that can strengthen your faith and bring you into a more trusting relationship with God. And I think that is what has happened with me. Somewhere along this journey, I've learned to trust more and to know that I don't have to have all the answers. I've learned that I cannot control every circumstance and every outcome. I have learned that I must do what God calls me to do and no more. God is in control. I am not.

I can provide an environment where Jack feels deeply loved and appreciated for who he is just at this moment. I can model my values and faith. I can be real and make mistakes and repair them the best I can. I can be Jack's interpreter at times and at other times back off and allow interactions to unfold however they will. I can provide a rich learning environment. I can encourage Jack's exploration of his interests.

I can and I will. Stressing over when and how it will all work out helps no one. So every day, I strive to do my part and have faith in the Lord for the rest.*

*remember I'm not perfect so when you see me stressing, feel free to refer me back to this post*

Where has your parenting journey taken you?
Posted by Marie at Thursday, March 29, 2012 No comments: 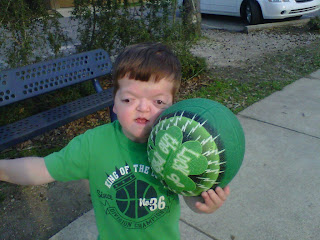 Irish remains a steady companion.
Posted by Marie at Thursday, March 29, 2012 No comments:

We're here. We're fine! Thank you all of our friends who have written to check on us.

We've been very busy but NOT with doctors or hospitals. Jack's next expected tests include a MRI and a sleep study. We don't have them scheduled yet. The sleep study will most likely be done here at our local children's hospital. We may have the MRI here as well. We are continuing to avoid the midface surgery as long as possible.

So just what have we been doing? What can I tell ya'? We've been living!

Jack has been home schooled since late October 2010. He has been blossoming! He learns very quickly when he follows his interests. He is not receiving a "typical education" by any stretch of the imagination. We love being able to allow Jack the freedom to learn without trying to stuff him into a mold into which he does not fit.

Jack has become much more social over the last year. He is now the "park mom and grandparents pick up guy". He loves all the moms he meets at the parks especially if they have any bare skin showing. He walks right up them and says, "Heyyyyy", Then he grabs their hand and instructs, "Sit down." Most of the time the moms find him adorable and before I know it he is sitting in the lap of someone else's mom ever so gently rubbing her bare arm or leg. If he sees a set of grandparents, he plops down between them and begins instructing "scoot to closer" until they understand and scoot right next to him so he is wedged into grandparent love.
His vocabulary grows daily. Fortunately, his articulation is improving quickly as well. To add an extra level of challenge for David and I, Jack has begun learning foreign languages from videos that he watches. So now we try to figure out what language he is speaking and what he is saying. Good thing I studied Latin, French, some Spanish, and some Korean in addition to Jack-ese or I don't know how I'd figure it all out. 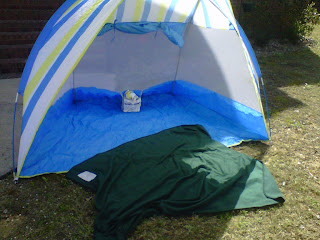 Anybody home?
Posted by Marie at Wednesday, March 28, 2012 No comments: