Just hanging out at Oma, Opa, and Uncle Noah's 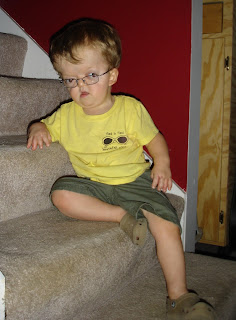 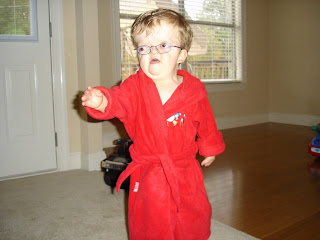 Here's Jack, all ready to head off to his prep school. So what if it's preschool prep? 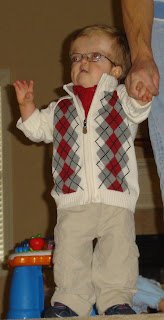 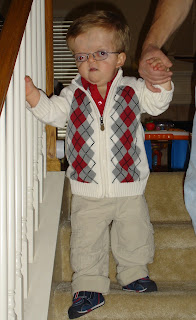 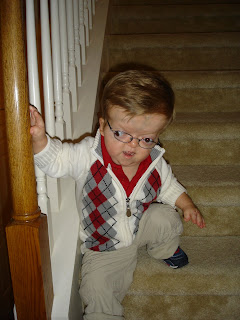 Arrr, matey, Captain Jack had to wear his costume today on the 30th since school is out on the 31st. 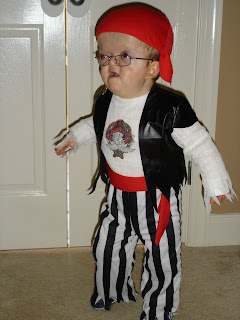 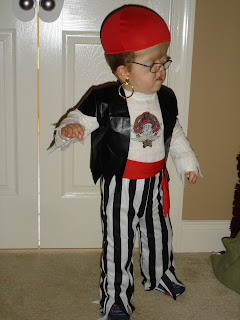 A couple of sea maidens help the Captain simulate bouncing over the waves. 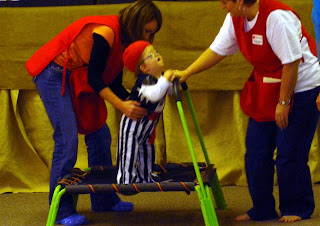 I know that I am behind on posting pictures or anything else. October has just flown by. Jack really loves school. These days I stop at the door to sign him in and he walks right in by himself. Carolyn and all his therapists and his teacher just love seeing Jack smile, laugh, and dance. It is so great to see him opening up to other people. He is doing so well that they are going to have volunteers working with Jack so our dear Carolyn can work with another child who really needs the comfort, routine, and structure of having a single person work directly with her everyday. Luckily, Carolyn will train each of Jack's volunteers before they go solo with him. She will still be in the same classroom, too, so Jack will still get to see her every school day.

Jack had a visual evaluation by a therapist for the Alabama School for the Deaf and Blind. She says that it appears that Jack really can see in all visual fields. His not looking at things is probably the way he adapted to not being able to see well when his eyes were not lined up prior to his eye muscle surgery. She gave us a lot of tips on how to get Jack motivated to use his vision again. Pray for us as we work on this too.

Jack seems to be breathing a bit better at night. We think that his midface has grown just a bit. His glasses and his Bipap mask suddenly seemed to not fit one day. We got a new mask since our old one was past its usual life span. Nana helped us adjust the headgear so now we have more comfortable headgear and little to no mask leaks. Jack did not have his sleep study on the new VPAP machine. We were having major mask problems the day the sleep study was scheduled for and it did not make sense to try a new machine with a mask that did not fit. Now I just have to get it rescheduled.

Jack's sign vocabulary continues to grow. His speech is still very slow in coming but he does quite a bit of vocalizing when the mood strikes him. Fortunately, we have a way to communicate while waiting for those little mouth muscles to get their act together.

We were very excited about trick or treating in our neighborhood this year. We have a great neighborhood and children are brought in from other areas to come trick or treat in our neighborhood. After really thinking about it, we decided to go to a Halloween Party at Jack's cousins' church. We think Jack will be more ready for the whole Trick or Treat scene next year. It was a hard decision but we know Jack and he won't want to just knock on a door and then leave. He would want to go inside and close the door and open it again and visit with the people inside. He does not even eat candy so it's not like getting candy would be any kind of motivation to move on to the next house.

I hope you've enjoyed this latest installment. I'm sure that I left stuff out. I will try to keep more updated!
Posted by Marie at Tuesday, October 30, 2007 2 comments: 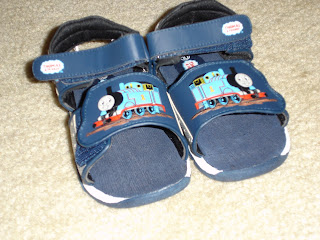 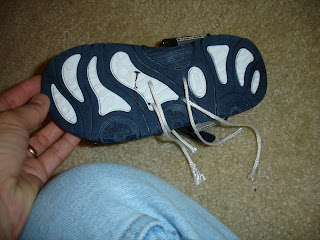 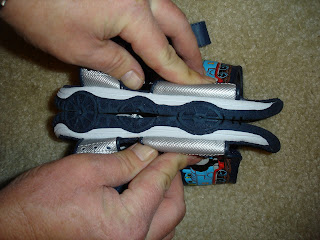 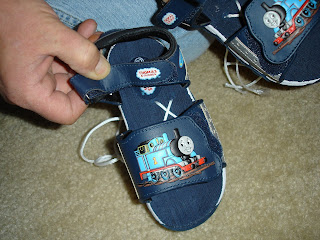 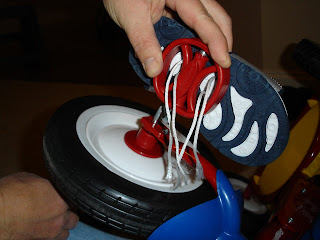 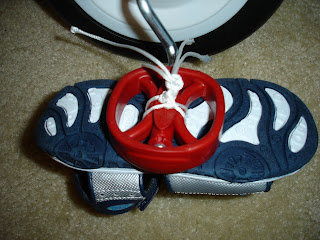 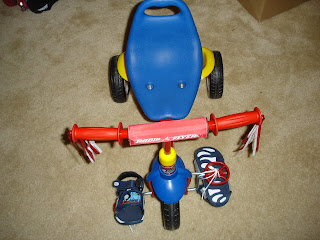 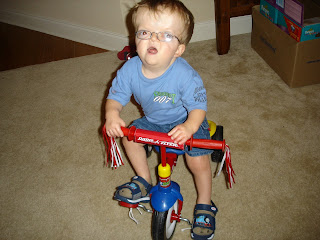 I've been meaning to post these pictures but first a little update. Jack has some more teeth coming in (I think I can see something on the bottom front right gum). He is drooling and a bit fussy and more congested than normal and he wants to bite on everything. Soudns like teething to me!
"School" has been going great. Jack is not just tolerating it. He actually enjoys it. They all love it anytime he laughs out loud. I know this because each and every member of the staff finds me and tells me about Jack laughing because they get so excited about it. It's funny and it is so great. I know that they really care about Jack doing well and they don't want to make all this therapy just a chore for him. Jack has really taken to Carolyn too. They have their own bond which I just am so grateful for.
Our home therapy sessions are going better these days too. Jack is just blossoming in so many ways!!!
Okay, now for the pictures...Melissa, Jack's home PT, gave us a great idea for helping Jack to keep his feet on the tricycle pedals. I went to Wal-Mart and bought a pair of large sandals on clearence. I think I spent $4 on the sandals. David drilled holes in the sandals and we tied those onto the trike pedals. Melissa had suggested screwing them on but there was no way to do that on Jack's little tricycle. Anyway, it works great! Now Jack can ride his tricycle without his feet slipping off the pedals!!!
The pics will have to be another post. I am having some kind of problem uploading and I have got to get to bed.
Posted by Marie at Friday, October 05, 2007 No comments: