If you've been following my twitter feed or read here, then you know that I have been doing Jillian Michael's 30 Day Shred.

Here's the rest of the story...

When I put my DVD in, Jack was hollering  sweetly requesting, "Jack's Big Music Show!" I told him that Mama was going to watch her work out movie first. He brought over the exercise ball he likes me to sit and bounce him on while we watch tv and we bounced and watched. When it was over, I tried to put on Jack's Big Music Show and take my DVD to the other room to actually do the workout. Jack followed me and kept saying, "Workout! Workout! Workout!" I thought, great, I'll get to work out and Jack's going to hang out with me. Nothing doing. While I put on the DVD, Jack grabbed the exercise ball, pushed it over and said, "Bounce high!" He wanted to watch it again. Too funny! He loves Jillian Michael's.

Here he is Sunday morning .... 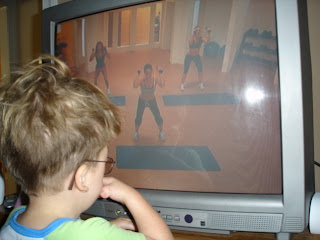 Ever try to maintain proper form and not clunk your preschooler in the head with dumbbells? It adds a whole new dimension to the workout!

And if you bonk him - know that I've done it to Ali already - weights, legs, hands, you name it. She can't QUITE seem to stay out of reach when I'm exercising.

Jack seems to want to stand where I would conk him right in the head. Not sure I can explain that to his Dad or his neurosurgeon. Makes for some inventive moves. :)