Disappointing Visit with the Eye Doctor

The good news is that Jack's cornea looks good. There are no dry spots. 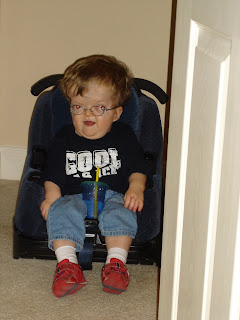 The bad news is that Jack's optic nerves are very pale. He says that they have been damaged by pressure on the nerve. He was unable to tell us an exact cause of the damage but it was most likely caused by the pressure on Jack's brain before he had his subdural shunt and third ventriculostomy. After dilating Jack's eyes, Dr. Cogen stated that Jack has very poor vision in his left eye. He said that there is no nerve swelling so there is likely no acute process impacting the nerve. In other words, the damage that he sees was caused some time ago and he has no reason to believe that there is currently pressure on Jack's brain that is causing further damage. About the patching, Dr. Cogen stated that studies show that patients with moderate-severe amblyopia like Jack need patching for all but 2 hours of the day. It typically takes 2 weeks per birthday to see results-if no results are seen in 3-6 months then it is not likely to get better. Unfortunately, Jack has not only severe amblyopia but also optic nerve damage so he is highly unlikely to have improved vision from the patching. He said that what we would need to consider is whether Jack will benefit enough from the patching to compensate for the developmental losses which will occur while he has the eye patched and cannot see. He expects minimal to no gain in vision although he said that he could not be absolute. Dr. Cogen said that patching Jack's eye for 2 hours per day will most likely maintain his current vision. He said that eye muscle surgery will likely not cause Jack's eyes to begin working together because of the optic nerve damage. He stated that the eye muscle surgery would help Jack's eyes to line up correctly but not track together. We've got a call in to Dr. Fearon, our craniofacial surgeon, to discuss further evaluation.
As you can see from the picture above, Jack is just as happy as ever. He's our trooper and I think this further proves what a trooper he is. He has adapted so well to not being able to see that none of us could really tell for sure (until today) that his vision really was so bad.
Posted by Marie at Wednesday, January 09, 2008

vtI just wanted to say that I'm praying that things can and do get better for Jack's eyes. A friend of mine who recently had an Apert baby gave us this site so we can better understand the struggle that her baby could be facing. Your son is an adorable little guy and you must be an incredible woman! Thank you so much for your site because it helps other Apert moms so much! God Bless you and little Jack!

Thank you for your kind words. They actually had me crying. I am glad that knowing about our life helps someone else. I am just a mom who loves my little boy very very much and who needs a lot of prayers. Please tell your friend that she (or you) can contact me at empwrn@bellsouth.net if you have any questions. I am happy to help other parents (and their friends) understand as much as possible. Nothing beats being prepared for the things that come up. Also, if your friend has not already joined the listserve at www.apert.org (Teeter's page), I highly recommend it.