Of Course there are Christmas Pictures

First up, Christmas put on by the school. Jack's preschool class has this thing they are doing this year where they use the kids' hands in all these crafty projects throughout the year. It's a cute thing showing how much the kids grow throughout the years but, truly, I still count and almost cry each time I see those five fingers made into a craft. So....all these holiday goodies are extra special to me. 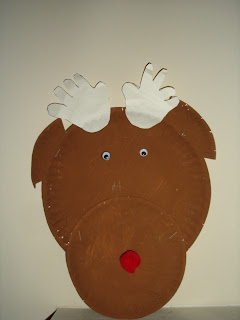 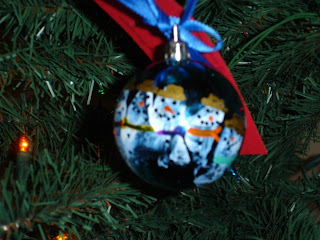 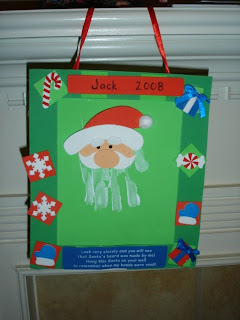 Jack colored!!!! See the scribbled green, orange, purple and red? That's Jack's work on this little plate. We plan to spend more of the new year talking to the vision folks about Jack's vision. We are beginning to notice more and more that he really does not seem to see very well. He has an amazing memory and that memory is how he gets by with alot of things. We'll keep you posted. 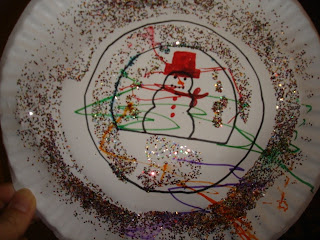 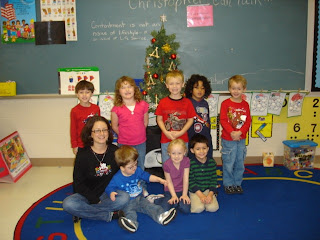 Next, Christmas Eve Eve...Mommy and Jack enjoyed reading one of Jack's "sound books". We call it Ding Dong because the doorbell is featured prominently in the story. 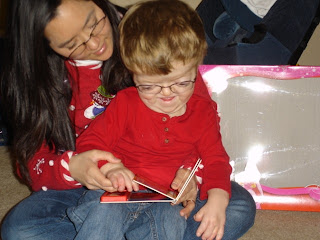 Elise, Holly, and Patrick came over for an early Smith celebration. It was late and Jack was tired so Elise helped him open up his present. It's a very musical Christmas this year! 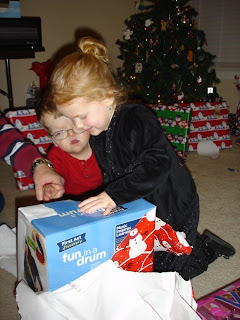 I think Elise loved the dress up box that Uncle Jack gave her. 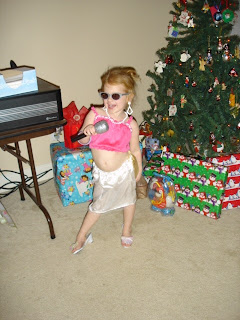 Holly and Patrick had to work Christmas Eve so they let Elise spend the night with us Christmas Eve Eve. Here are Elise and Jack reading The Night Before Christmas just before we left for the big Smith gathering late on Christmas Eve. 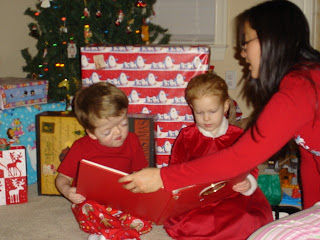 The Big Smith gathering--Lisa had a pile of kids sitting on her waiting for the present opening to begin. Where's Jack? Passed out in a bedroom upstairs! 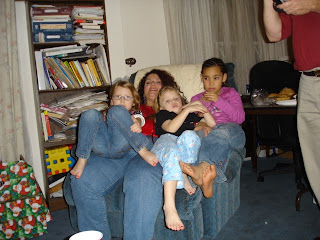 I opened Jack's presents for him since he was asleep upstairs. Nobody took a picture of me being an excited kid opening presents. It was a pretty good imitation I thought. :) (Don't worry Jack is not wild about unwrapping stuff yet so my opening it for him was a good thing. The stuff was ready to go the next morning.) 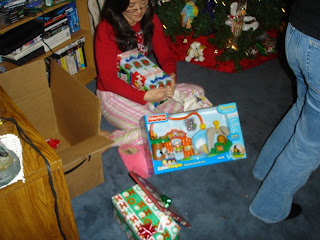 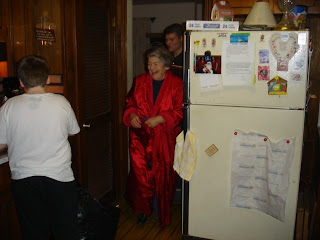 We all got a lot of really nice things for Christmas. 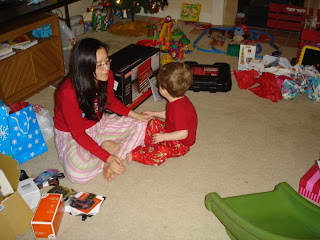 Yes, it's a slide in our living room. 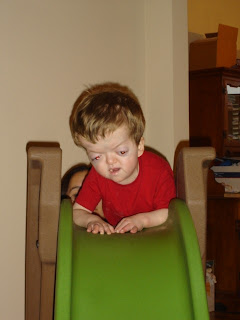 And a Little People Circus... 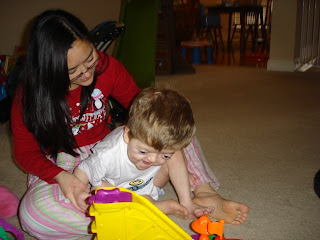 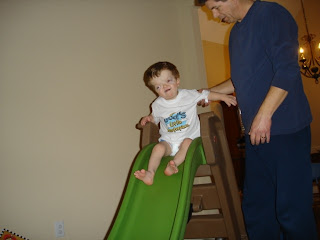 After we played at home, it was time for the tired family to head to Nana's for the Big Phillips get-together. 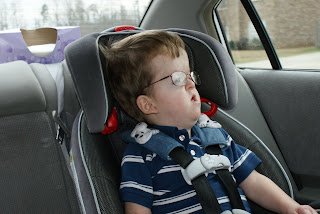 Who is getting a picture of who? 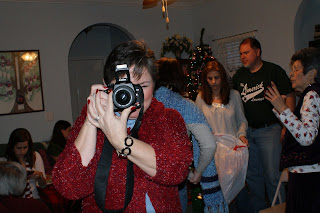 Wandering through the crowd... 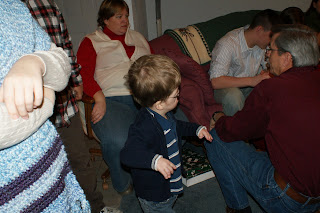 I had the mistaken idea that I could get Jack tired enough to take a nap so he would be nicely rested before the Petersons came over for our after Christmas get together. Anyway, he still loves riding in his little red car. 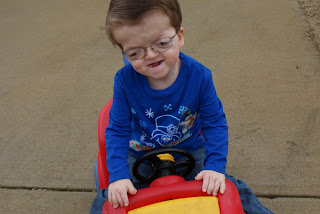 What would Christmas be without two best buds and a train (and Kyle's shadow)? 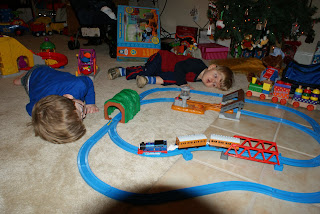 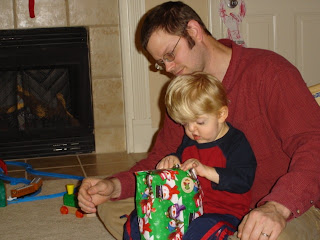 He must have taught Sophie about gifts and unwrapping too! 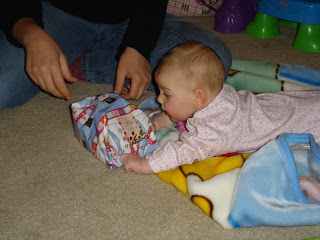 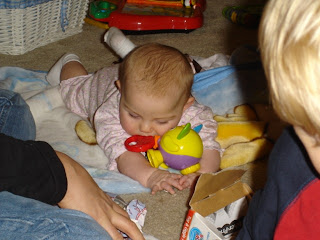 Jack just watched Wall E (well the first part of it) and then he got a front loader from Sidney's Nana--cool to see how the wheels were turning. It's like he was thinking "Oh I get how this thing works. It's kind of like the movie." 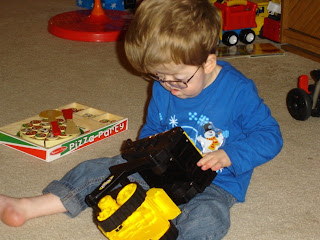 We really enjoyed Christmas this year. We are all (still) very tired from all the running around and staying up late but it was really worth it. We made no trips to the emergency room and other than being a bit worn out Jack had a good time. He is really enjoying all the great things that everyone got him. It's a very musical Christmas!!! We love to hear him playing with his drums and bongos and maracas and jingle bells.
I don't know if I'll get a chance to post again before the New Year. I'm ending this year (maybe) with this final picture to show everyone just what we can look forward to in the coming year. At Jack's last IEP meeting held the week school let out for Christmas, the IEP team added a new goal to Jack's IEP. The new goal is that Jack will walk from the front door to his classroom with an appropriately sized backpack by the end of the school year. We were supposed to start out with an empty pack and build our way up. Well, the other day, I just thought I'd see how he did. He walked all around our neighborhood and out running errands wearing his little backpack with about 5-7 pounds of his stuff (and my stuff) in it. God is good and I look forward to posting about it in the new year! 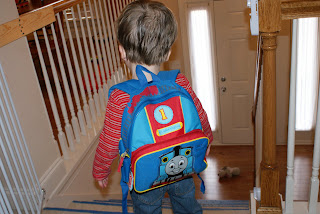