Thanks to AAPVI (Alabama Association of Parents of Children with Visual Impairment), Jack had his first fishing trip on Saturday. It was sweltering hot and Jack was having a difficult "allergy" day but we still had a blast!

Oaky.... so he really wasn't all that interested in fishing but he humored me for a bit and sat with me. 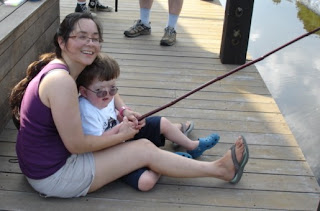 Uncle Noah WAS all about the fishing. This is just one of the many fish that Noah caught that day. Unfortunately the lighting, the lake, and the color of the fish did not combine to make great pictures so it was hard to see the fish in most of the pictures we got of Noah and his fish. 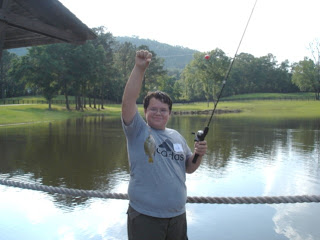 Jack and I caught our first fish when we had put our cane pole down to get a picture of Noah with his fish. Here I am trying to get Jack to pose with the fish. That poor fish had the misfortune to be spinning around when I put it in front of Jack so Jack gave it a whack with his hand and sent it spinning some more! LOL! 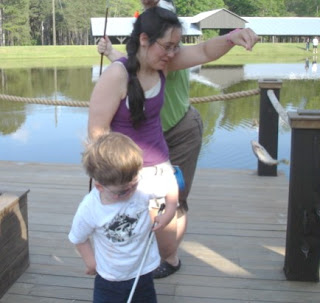 Oma and Opa took Jack for a walk and look what I did! 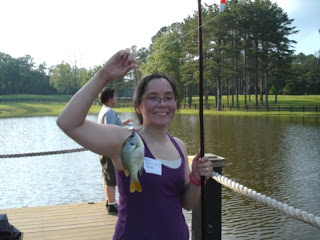 Jack's favorite parts of the trip were the interesting brick tiles in the stable, the drain in the stable, just generally running to and fro and eating hot dogs and COOKIES!!! All in all it was awesome. Each of these little adventures helps Jack to see how much fun it is to hang out with other people and try new things.
Posted by Marie at Monday, May 24, 2010

Looks like a great time was had. We had a very hot day today too. My Joey loves to fish....
I can't wait to share this post with him.
Lisa

Sounds like great fun. I'm jealous of your hot day - winter has definitely arrived down under.

What a great fishing trip, love, love the photos!!

Looks like it was a day packed with fun! the spinning fish is a hoot! :o)