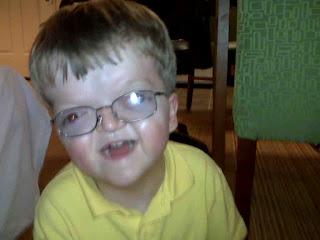 This has been a great trip with great news from Jack's doctors. This afternoon, Dr. Fearon said that he was very happy with Jack's MRI, the most recent sleep study, and our reports regarding Jack's development.

After much discussion, Dr. Fearon said that he felt that Jack could wait at least another year and perhaps longer before he has his midface surgery. He did say that he feels that Jack's midface will require more distraction (pulling forward) than most of the other kids because it is so retruded. He said that Jack will probably wear the RED a bit longer than most kids to get as much over-correction as possible.

Dr. Fearon said that the bigger Jack is the less complicated he thinks the surgery and recovery will be. Also the longer we can wait, the less likely Jack will need another midface surgery. We are going to wait as long as we can for this one. Dr. Fearon is a bit concerned about the Bipap preventing us from having as close to a typical life as we all could have. The truth is Jack being on the Bipap does make life a little different for all of us but not in such a way that we are ready to head toward a major surgery sooner rather than later and perhaps cause the need for another repeat midface surgery in Jack's future.

Dr. Fearon told us that sometime after Jack's midface surgery he will do another cranial vault to move Jack's brow bone forward to provide better eye protection. Other than that, he did not project any further surgical needs. That was also great news.

Now my friends, I have a few specific things I'd like to ask you to pray about.
1) In our most immediate list of concerns, we have been informed that because Jack had such a great sleep study back in August, Jack no longer meets Blue Cross Blue Shield's criteria for oxygen. We already had to pay out of pocket to get Jack's Bipap AVAP because Blue Cross does not even have a code to cover the machine. Now we are being told that we will have to pay the monthly rental cost for Jack's oxygen concentrator. Jack does not always require supplemental oxygen with the Bipap but when he gets a cold or has increased congestion for any reason, it is hard to keep his oxygen saturation up without the supplemental oxygen.
2) This next prayer request is more of a right now and over time prayer request. After the midface surgery, Dr. Fearon puts a nasal trumpet in the child's nostril to facilitate breathing during the most swollen state. Jack's nasal passages are VERY VERY narrow and there is a very real concern that a nasal trumpet will not fit. Please pray that the nasal passages will grow large enough for that nasal trumpet to fit in there when it is time.
3) Another prayer request in preparation for Jack's midface surgery--Dr. Fearon told us today that he has only had one child so far who required a tracheostomy after the midface surgery. She needed the tracheostomy only temporarily until the midface could be pulled far out enough for her to breathe. David, Jack, and I have worked long and hard to avoid Jack having a tracheostomy while still maintaining adequate oxygenation during sleep. We would like to continue to avoid it even temporarily. We discussed some options with Dr. Fearon. I am asking that you pray that God will give us and Dr. Fearon clear guidance in what to do when it is time to decide which route to take.

I had somewhat of an epiphany one day when I was worried about Jack and whether his "grumpiness" was just usual kid stuff or a sign/symptom of something bigger. If I truly believe that God is working out his plan in God's life then I also must believe that God will guide me as his mother if I let him. And I also have to believe that everything that happens in Jack's life works for his good even if I can't see it at the time. So y'all remind me of this little epiphany later because I believe God is faithful but, like the children of Israel wandering in the desert, sometimes I forget.

This message has been sent using the picture and Video service from Verizon Wireless!

To learn how you can snap pictures and capture videos with your wireless phone visit www.verizonwireless.com/picture.

Note: To play video messages sent to email, Quicktime@ 6.5 or higher is required.

WOW! All my best to Jack and you and the hubs! Sounds like pretty all around good news! That's a shame about the oxygen. It would seem it would be covered. Insurance companies are crazy. It's so so sad.

I'll be thinking of you and sending lots of positive thoughts your way!

Now I have to go catch up, I was just here the other day and now you've got a ton of new posts! Off to read!

Hi there. I've heard of a book...I've actually heard of it a few times however did not realize until right now that it was written by a 23 year old who "was diagnosed with Apert syndrome the day after her birth and has since undergone more then 60 surgeries". When I read that I immediately thought of Jack. I haven't read the book yet but I would like to do so. :) Anyway, thought I would pass it along incase you haven't heard about it yet. :)

The book is JUST THE WAY I AM: GOD'S GOOD DESIGN IN DISABILITY

Wow - sounds like some good appointments and results there.

Will definitely pray for Jack and his upcoming (but thankfully not too soon) surgery.

Congrats on all the happy stuff. Jack is on my prayer list.

I'm so glad that the visits all went well! I'll be praying for your requests!

Happy to hear the good news..
Sad that the oxygen is no longer covered. that's crazy to me. Canadian health care is so much different.
In my prayers..
xxoo

Praying for Jack and his doctor.