Revving Up the Coloring

Jack is not known for being a big fan of coloring but he is well known for enjoying playing with anything with wheels. I saw Vroom Vroom at No Time for Flashcards and it reminded me of a great idea a friend had given me to have Jack color with car crayons. I never found any so I was thrilled to finally get to try out the idea.

I already had candy molds that I used to make Jack dairy free chocolates back when we thought he was allergic to all dairy products. And I had some crayons that we had previously melted to make thinner and easier for his little hands to hold. I just remelted them.

Here was my finished product. 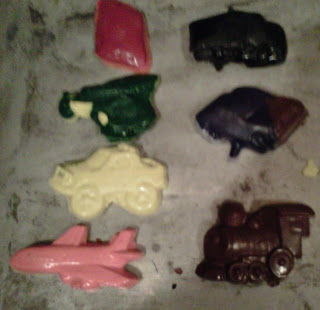 The truck, airplane, and train turned out best. Next time, I won't use previously melted crayons. I think I would have gotten better results. I also probably won't use the muffin cup liners. Last time I melted the crayons straight in the pan and that seemed to work better.
And a little tip....if you are messy like me and excess crayon is cruded on your candy mold, just boil some hot water and pour a little over the mold just where the crayon is stuck. It melts the excess and you just rinse it away. (That is okay since crayons are non-toxic, right?)
I chose the best looking ones to present to Jack. 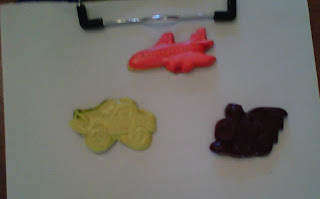 We got a bit of zoom zooming out of them. 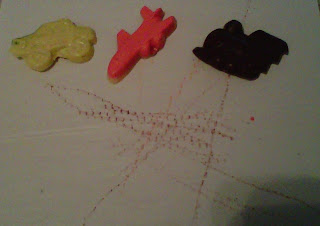 Jack wasn't really thrilled with them though and he has learned a grasp that works for him with regular crayons. I'm not sure that he could really tell what they were supposed to be except for me telling him because of his visual limitations. I do think that a visual child would love them though. So we'll be filing this away under creative gift ideas.
Posted by Marie at Wednesday, February 09, 2011

Email ThisBlogThis!Share to TwitterShare to FacebookShare to Pinterest
Labels: ideas that don't quite turn out, Life is Therapy, preschool fun at home

My kids would love those! I love the creativity you showed to get him interested in coloring. May I suggest printed-out coloring sheets of his current main interests?

Wanted to let you know that there's a Life is Therapy idea and plug at the end of my latest post.

Wonderful! You can also freeze the mold to get them out and remove excess wax. Great project!

Sheila, I did not think of that at all! Great idea!

Staying Afloat--Thanks for the idea. I think we may be at a point of trying coloring sheets again. I tried before but he just was not interested. Now that he is more interested and has an easier time holding crayons we'll give it a whirl. I'm looking forward to checking out your post too.

Those are great! I have a ton of broken crayons that could use a mold...

those are so cool. My kids would also love these.