A Season of Hold Me, Squeeze Me, Be Near Me 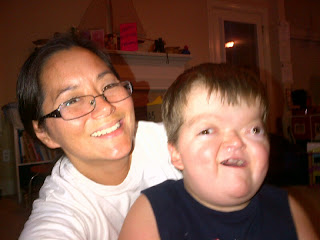 As far as I can remember, every mother of grown children I have ever spoken to at length has, at some point, mentioned "seasons" or "phases" or "stages" that they and their children went through. Talking to mothers and reading a lot and observing other children helps me to remember (most of the time) that where we are right now is not forever and things that need to change will not and do not need to change RIGHT NOW.

Right now, in public, Jack requires very close supervision and sometimes hands on guiding assistance. We're not the mother-child pair who goes to the playground/water park so mom can take a break and relax while child burns off energy while playing with other children. In very familiar places without large crowds, Jack and I are both okay with him running off and playing as long as I can see him and he can find his way back to me.

Jack's interests are not the same as other children. He is not yet at a stage of cooperative play with other children. There is a small set of adults with whom he plays together (and not just parallel or alongside) but all of them worked hard to get Jack's trust enough to reach this stage. And they are willing to meet him where he is in play. I am one of those people and Jack is actually a people person. He wants company while he plays.

Jack LOVES being near other children and hearing them and he does try to join in their play sometimes. His language is still delayed so he needs help communicating with other children. Also, his vision plays a role in not being able to keep up with children as they dart about the playground. It's easy for Jack to "lose" the children he is attempting to play with. And he plays differently than other children; being an only child at home, vision, personality, fine motor and verbal skills probably all have a little something to do with this. So, for now, I act as a facilitator when he does play with other children.

Also, I work both out and inside our home. I have appointments that I go to and leave Jack at home (with his dad who works from home). Then, I have paperwork and phone calls that I do while I'm at home, not to mention routine housekeeping, cooking etc. So Jack misses playing with me at these times. He misses basking in my undivided attention. I think his love language may be quality time.

These things cause Jack to "need" me when we go hang out at the park but there's more.

Jack is still very impulsive. As in, he has a thought and he will often act without thinking. He'll run right in front of someone swinging. He is better about not running off into the parking lot than he was but he still does it at times. He gets in a hurry to get where he is going and he either flat out doesn't see or doesn't notice obstacles in his path--other children, curbs, steps, drop offs, chalk, bubbles, balls--and he runs right into things or falls. So I am often just there reminding him to slow down a bit or calling his attention to obstacles especially other children.

Jack is becoming more independent and I do like that I can sometimes stand off a bit and talk to other moms. But he's not yet ready to just run off and play by himself. I need to keep him in my sight and frequently find myself cutting off conversation to run after him.

All too soon this season will be over and he will be more independent and I will miss this closeness that we have. Oh I know that we will continue to have closeness, just a different kind, but I know I'll miss this.

So when you see me at the park or we come to a "meet up" and I don't come to sit and chat with all the other parents, please don't think I'm anti-social or feel bad for me because I "can't sit down". I am enjoying our season even as I am doing what I can to help Jack move forward. I will have time to sit and chat as Jack continues to develop. It's just not yet.
Sent from my Verizon Wireless BlackBerry

What a shame we don't live closer - we could meet up at the park with you and have one of those conversations where we have to shout to each other as we climb all over the playground equipment with our kids!

I always say I don't understand how mothers can sit on benches at the playground. My E. is constantly darting in and out- we try to choose playgrounds with just one entry/exit. FYI, my "regular" kids seemed to need me around too. I have one who had a talent for disappearing...

For E., this is a stage that has gotten better, but has never disappeared. So if he used to act completely without thought 100% of the time, now it may be 40 or even 20%. But I never know when it will happen. So i hear you, and applaud your focus on the positive.

Wouldn't that be fun? I can just see us shouting at each other over, under, and around the equipment!

Thanks, as always, for your encouragement! Jack is definitely a "free roamer". Fenced playgrounds are awesome as long as they have a walking surface that doesn't give Jack the heebie jeebies or whatever makes him just beg to leave the area.