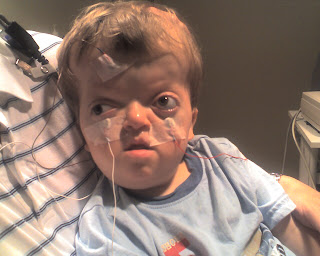 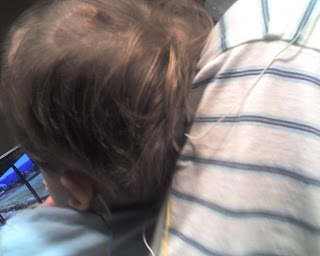 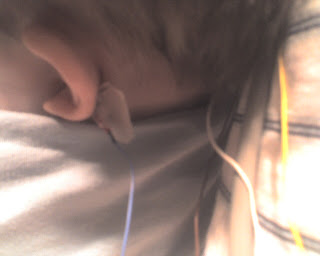 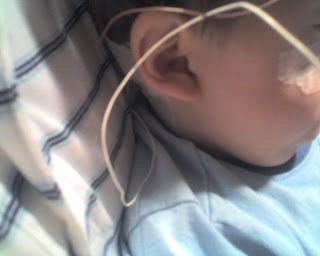 Yesterday, Jack had a VERG. They put a few electrodes on his face, one behind each ear, and one on the back of his head. I am not certain what the V stands for but the rest of it is electroretinography. It measures electrical impulses along the optic nerve to the other structures in the eye. Dr. Braswell, our neuroophthalmologist, is a great guy. He called me today to give me the results and started out with, "Jack does have vision in that right eye." I was a little confused and said, "Dr. Braswell, we knew that. It's his left eye we were worried about." My clueless, pollen clogged brain did not realize that he was trying to be gentle when lowering the boom. Anyway, the good news is that Jack does have vision in the right eye. Yep, that's it for the good news. So the vision in the right eye is normal? Well, no but he does have vision. The bad news? They got a good test of the left eye and they know that the optic nerve is not transmitting the images it picks up to the rest of the eye. He does not see out of his left eye. What he sees he sees with his right eye.
Actually, there is more good news. After I had some time to think, I remembered that I forgot to ask some important questions. I called his technician back and after talking with Dr. Braswell, Tylee called me back saying that as long as Jack's shunt continues to function, there is no reason to believe that Jack will have any progression of his vision loss.
So the nerve damage is done and, at present, there is nothing to do about it other than to know what we are working with and work with it. At least we're not frustrating him with the patching any longer. Anybody need some hypoallergenic eye patches? I've got a bunch and you can have them.

Okay, enough of that medical stuff...on to the cute pictures that are the real reason that you are here....Now that we've gotten the okay for Jack to wear his helmet again. I thought that we really should begin making him wear it when he rides his tricycle and/or his push toys outdoors. Look at this face.... 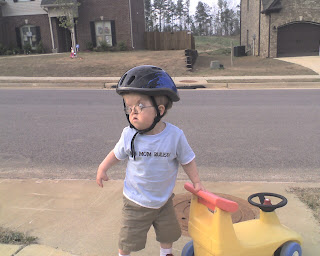 Do you see the "Is she really going to make me wear this stupid helmet?" look in his eyes? 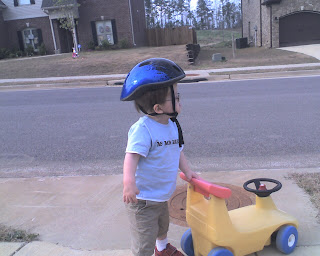 Don't worry. I adjusted the straps so that the helmet was snug after this shot. Jack really really really hates his helmet but I did manage to get him to have a good time for a little while.... 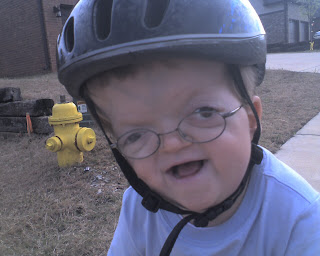 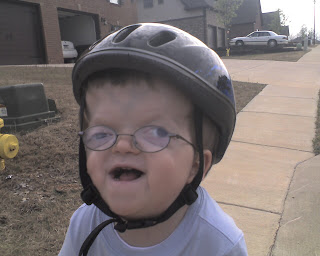 After this, he got mad again and cried and I finally took the helmet off (it had only been about 5 minutes not the eternity that he thought he had been wearing it). He went to hug his tree for comfort since he did not really want to hug on mean ogre Mommy who makes you wear a helmet. Is he just cute or what? 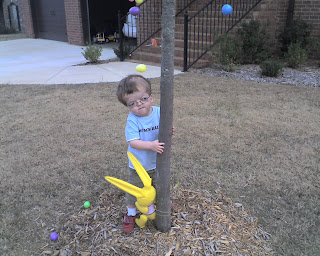 He's back to not having to wear the helmet again because the eschar came off his old subdural shunt incision and he has a dressing on his head that we don't want to get pulled off. Ugh! How are we ver going to get him used to a helmet if we can't be consistent in insisting on it's use?
Posted by Marie at Thursday, April 03, 2008