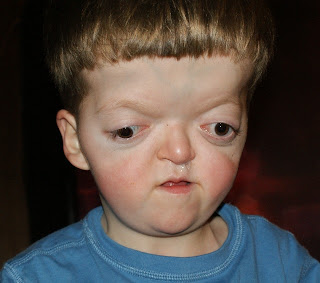 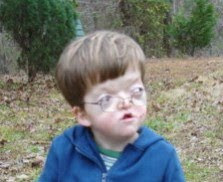 .
Obviously, it's the same kid. Look again. What are your impressions? If this is your first time here and you've never met Jack, heard about Jack, or read about Jack, that first picture gives a much different impression than the second picture.

The second picture shows a child who is engaged with the world around him. He's looking at something. He is reacting to something.

But what about that first picture? He is not looking at anything. His facial expression is somewhat blank. He does not appear engaged with the world around him. He just has a blank stare.

Jack has this look. It's hard to get on camera because I'm never thinking about the camera when I see it. I went back through several months’ worth of pictures to find that first one and it doesn't capture the look completely. The look is a blank stare. You might describe it as staring off into space--like his eyes are open but he does not see anything.

Often he is very engaged with the environment around him when he does this. He is just not engaged visually. He may be listening intently or tactually exploring.

Have you ever seen a video of someone who is wandering about in the dark before their eyes adjust? That’s the look!

I worry a bit because the look might make some people jump to conclusions regarding Jack’s intellect. At first glance, he might appear to be completely disengaged from the world. It takes effort sometimes to pay attention and figure out just what he is paying attention to.

It’s difficult to explain to people that Jack doesn’t always use his eyes. But that’s what it is. If I had his vision, I hope that I would find other ways to explore my environment too. Still, he’s not fully blind so to treat him as if he was totally blind makes no sense. He has vision and he uses it. He doesn’t have good vision though so it doesn’t make sense to treat him as if he can see the world like most of us. AND it’s hard to know just exactly what he can and cannot see. It’s hard to know if he is not using his vision because he really can’t see something or if he has just adapted to not using vision that is blurry/unfocused.

Back in this post [editor's note: How ironic! That post was written one year ago today.], I said that I cannot wait until we’re on the other side of Jack’s vision issues and have things figured out. Well, we’re still on this side of figuring things out. I’m not crying for the lack of vision anymore but we still don’t have a solid plan and I still feel like we’re fumbling around in the dark trying to figure out what part his vision is playing in Jack’s overall development and what we should or should not be doing as far as adapting his school work and his environment.


Do you know someone who is legally blind and has vision of 20/300 at best? I’d love to hear from someone who sees like Jack sees.

Growing up, my neighbor was blind. Every day after school, I would go to her house to do little things for her like help her write out bills, sort her mail, coordinate her wardrobe and she was one of the most so in tune with her environment. Even though she could not see, she made up for it with all other senses.

I was just talking to my daughter about this. I was explaining to her that some people cannot see. We both closed our eyes and we talked about all the other senses we have and what we can use to "know" things. Sometimes, people who cannot "see" can actually see better than those with vision! I am sure that blank about his "blank" stare.

Amazing. One of my very closest friends is blind (I think she has about 40% of her vision in one eye) and an amazing inspiration. I bet she would love to talk to you about it.

If you want, shoot me an email and I'll let her know you might be emailing her. :)

Most strangers, when they first look at my daughter, and she is not expressing some emotion at that moment, they think she looks angry. I am so used to the expressions on her face, and I know them so well, it startles me when other people don't see when she is happy. She wears glasses too because of her droopy eyelid and shape of her eyes. I worry that her vision will deteriorate rapidly.

Our local Vision Ed centre has special goggles you can put on that simulate different levels of vision - they are great as they give you an idea of what your child may actually be seeing. Ashlea's therapists just brought them out to her preschool this week so all the kids could try them on and learn about vision impairment and what it might be like for Ashlea.

Joey does have glasses but he sees well with them..and pretty good without them...but he still has those stares. In fact at first we thought that they were seizures. After an eeg proved they were not, we figured he just stares to escape when things are too overstimulating.
....

great post. I will have to check out the life is therapy posts!

I have no idea how to help. It must be so frustrating.

Sarah and the Gentlemen said...

What interesting observations.
Jack is such a cutie.

What a thoughtful, loving mama Jack has!

I'm thankful for you that there seems to be some improvement in Jack's vision. I hope that you are able to get some good information and further insight into how Jack sees the world.

Great post!! I have no advice or words of wisdom - but I am tweeting this post - so maybe someone else will.

Hi Marie
I don't know any kids at the moment who are blind or have significant loss of vision BUT what I wanted to say, was that in my profession as a lawyer, I have been lucky to come across a mediator who is blind.

This fellow is in his mid forties I would say, and although you can tell when you look closely at his eyes he is blind, nothing else (aside from his big georgeous German Shepard dog) would indicate he is blind.

He is so well adjusted to everything sighted people just take for granted.

But what I find most inspiring- is that he is a private mediator (mediates all types of legal disputes and is a lawyer) and he is in high demand.

He is brilliant. If you want something settled, he is the guy to try and get hold of to bring parties together.

I think because he cannot rely on assessing the body language of the parties he is dealing with - his hearing is so attuned to picking up signals that he can quickly assess peoples views, wants and needs etc.

Now I know our little guys have hearing issues too, infact all the 'normal' sensory organs, smell, sound, sight, taste are probably not as brilliant as others, but as we know, our kids compensate so well with what they have.

This fellow has all the written documents he receives put into audio and he has some type of braille computer that he uses. He is simply fantastic at what he does, and is a really really nice guy. The type of guy who would also have friends lining up to have a beer with him.

Anyway, I love little Jack's stares, and I know that he will be a pretty amazing judge of character over the years too!

Thank you all so much for the encouraging words!

I definitely see him more mature and engaged with his environment in the first photo.

Alison that is a great idea. We got to wear those goggles once sitting in a meeting with the rest of the therapy team. I don't know why our TVI has not thought to bring them to Jack's school to let them try it. I asked her if we could borrow them and walk around our house and neighborhood but we never got to do it. I think I'll ask again.
Maria--thanks so much!

That's very wise of you to be able to tell that he's using other senses, and not just tuned out because we're all accustomed to seeing people engaged with their eyes. And it's so good for him to be able to have heightened other senses to make up for his lack of vision!