I've recently become concerned that Jack might be color blind in addition to being legally blind. When you ask him to pick a specific color, he won't do it. If you ask him the color of something, he usually does not respond.

But it could just be that he doesn't know his colors yet. Jack's "itenerant teacher" (she's the case manager/teacher that he gets twice a week through our local education agency) came up with a plan to teach him his colors. The idea is that he will be "immersed" in a certain color for up to two weeks at a time. We won't ignore the other colors. We will just try to plan activities for Jack using the "color of the two weeks". She has a list that shows which colors kids tend to recognize first. If Jack shows true recognition of the "color of the two weeks", we will move on to the next color on the list. If Jack does not know a particular color by the end of a two week period, I think we'll have a clue that somethings up.

The first color is black....

The new program is supposed to start this week at school but I decided to get a jump on things this weekend with a little Kaboom! Painting. 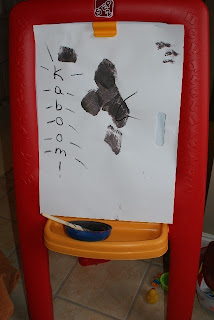 What is Kaboom! Painting? Well, you take a paint brush covered generously with the paint color of your choice (black for us) and you slap it on the paper while saying the ultra fun word "Kaboom!" only you say it more like "KAAAAAA BOOMMMM!"
After you finish your Kaboom! Painting, you will have an item fit for a rorshach test but if your kiddo is a little resistant to art, Kaboom! Painting could be just the thing to get them to see that art can be fun! This worked so well with Jack that I tried to slip a little coloring into the mix. I grabbed a crayon and handed it to him for the next "Kaboom". He looked at it funny but was still willing to do it. But as soon as crayon hit paper, he said, "All done. All done. Trick. All done." 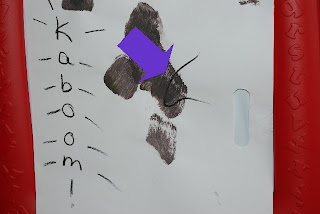 Well, at least, he did make the one mark.

To see other's Magic Marker Monday posts and to link up yourself, click here.
Posted by Marie at Sunday, February 14, 2010

I LOVE kaboom painting! What a fun idea! I think Mr. Jack is on to you though ... "Trick all done"... Hehe... the little guy is too clever for his own good :D Nice work, Jack!

How neat! I hope ya'll had a good V-day!

Confessions From A Work-At-Home Mom said...

I had serious problems with my colors when I was little. My parents actually had me tested for color blindness-- turns out, I was just a slow color learner and my eyes were ok!

~Elizabeth
Confessions From A Working Mom

Too fun!! Sorry it didn't carry over into crayons, though. Oh well - at least the Kaboom part was fun!

Kaboom painting sounds so much fun. Jack did very well. I love it. I could try this with teqnique with Abby who is still struggling with her colouring. Kaboom!! xo

HAHAHA! He's totally onto you. Maybe he's just not into crayons as an art medium. I must say I was never that crazy about them as a kid (something for me to keep in mind myself)

PS I love the idea of kaboom! painting.

You are all right. That little guy is totally on to me! A Mama has to try, right?