Jack has a new constant companion. No, no, Irish has not been replaced. Where Jack goes, Irish usually goes too but now you'll be seeing Jack, Irish, and "Cane". I read somewhere that it's good for a child who uses a cane to name it. As typical with Jack, he names things what they are [He's got a plush puppy named Woof woof, a barking plush dog named Barking Dog, etc.]. So his cane is Cane.
A cane? Why does Jack have a cane? He's not blind! No, he is not completely blind. I think my recent Life at Dusk post gives a fair analogy of what Jack's sight is like. The cane is for Jack like glasses are for a near-sighted child, it helps him to better understand what he sees. It helps him to better navigate the world around him.
But Jack already wears glasses! Yes, he does. The glasses protect his eyes. Jack's visual impairment is caused by optic nerve atrophy and cortical visual impairment. The problem is not the image that comes into his eyes. His eyes themselves actually do a great job and only need a slight amount of correction. So the glasses don't really help his vision in a functional way.
Here are a few more articles that might help you to better understand Jack's cane use.
Why Do You Want to Make that Child Blind?
STEP TOWARD EQUALITY: CANE TRAVEL TRAINING FOR THE YOUNG BLIND CHILD
Blind Enough for A Cane?
We introduced the cane late last week. David really got Jack's attention by taking the cane and walking around in our tiled bathroom. David didn't say a word but Jack heard that cane tapping and ran after David to see what was going on. Here's a shot of that first evening. David's next step as Jack's orientation and mobility instructor was to take Jack on an outdoor walk. Jack is already familiar with our home so he prefers not to use the cane in the home. David knew that we needed Jack to see that the cane actually benefitted him. 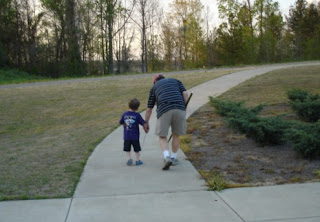 David is carrying a bamboo walking stick to simulate a cane and showing Jack how to keep the cane in front of him.
It wasn't long before Jack got the idea. 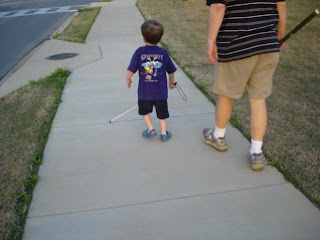 Of course, he's a little boy and he wanted to have a little fun like his Uncle Noah. 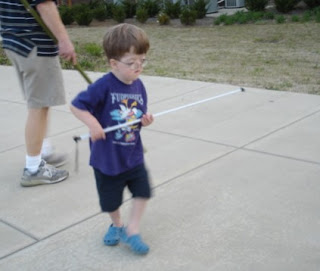 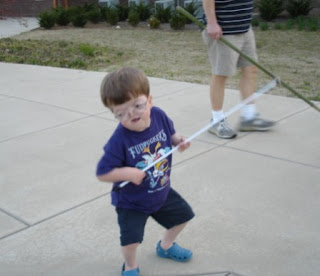 Here's a short video taken during this first cane outing.


After walking around on the sidewalk for a while we decided to try locating and going up and down curbs. Jack is very used to having to stop and shuffle walk until he finds the edge of the curb with his feet. Here's David trying to help him realize the cane can help him find the curb so he can continue his normal pace. 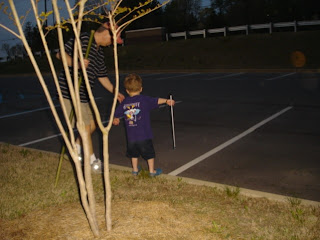 Jack discoved on his own that the cane helped him to "see" that the white lines in the parking lot were flat and not elevated. He was fascinated by this and ran his cane over and over the area. 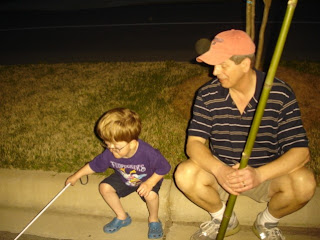 Here's Jack proudly posing with his cane. He told me "Achoo [it's how we used to get him to smile for pictures] take a picture." 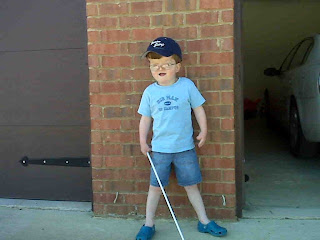 Learning how to manage the cane in the grass. 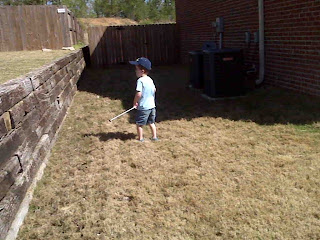 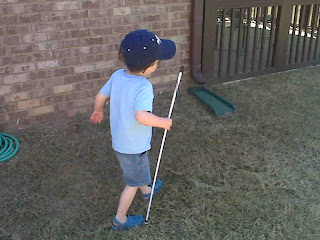 Tap tap tap on the wall 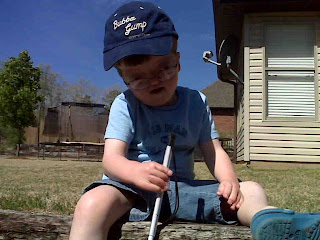 Using the cane to explore the park 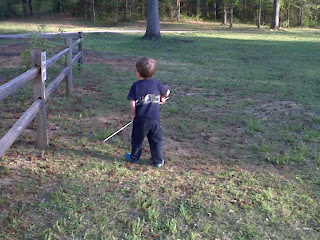 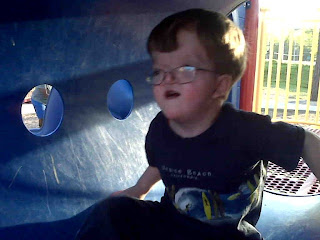 He's still a little boy so sometimes he has to be reminded that the cane goes on the ground not waved around in the air. 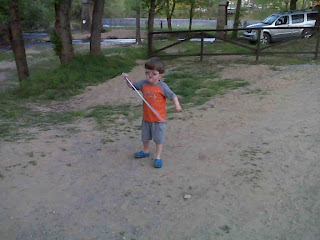 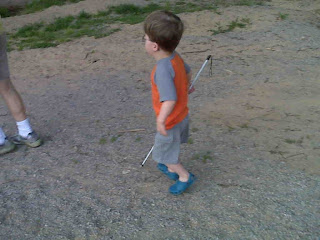 Crossing a bridge over the creek 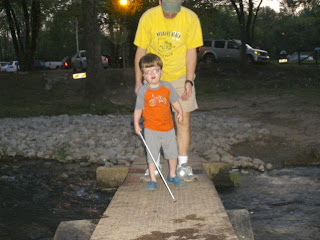 Hey Daddy, come sit with us on the creek bank! 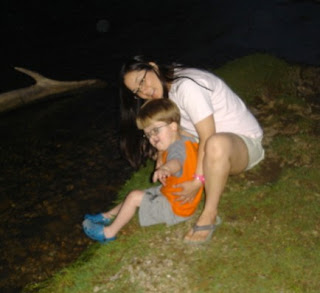 That is AWESOME!! Another step towards independence. He looks great using the cane - like has has picked it up already.

As the mum of another little one who is legally blind, seeing Jack exploring his world with his new cane brought a tear to my eye!

Fantastic!! Look at Jack and his cane. He is loving it.
I love that Jack is enjoying it and exploring his neighbourhood.

Marie, You already know this, but you have an amazing little boy. I know you are so proud of all he's accomplished since his birth. He's such an extrodinary kid with extrordinary parents!!

Fabulous! Amazing how he's picked it up so quickly. Such a smart kid you have.

I bet he is feeling so much more independent.

Have a lovely WW.

He looks like he is enjoying the indepence it gives him.

That's so awesome! I'm glad he took to it so quickly!!!

Oh that's awesome! Looks like he is adapting to using it pretty quickly.

Cracked me up that you used to say "achoo" to get him to let you take his picture because that's what we used to have to do with Noah too!

Fascinating post - he seems to really have taken to using the cane quickly. :)

My son has a teddy bear my brother gave him when he was born that has "My First Bear" embroidered on the bottom of one foot. His name is... you guessed it... First!

Way to go Jack! How inspiring.

I enjoyed the video so much! I found myself answering "Hey!" LOL!

Looks like he really got the hang of the cane. Way to go Jack!!

What an amazing family you have. That Jack has too! A wonderful post and mini clip! I would imagine it would be very hard to learn to use a cane. I was thinking about it the whole time I was reading this post.