Where the Beep Beep Went Wrong

You might want to review last week's Where the Beep Beep Went Right. And then the intro....

New to the Life is Therapy series? Here's a quick blurb to tell you what it's about: 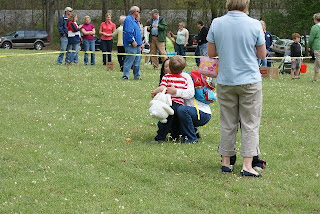 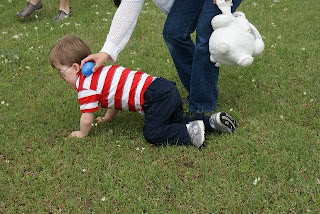 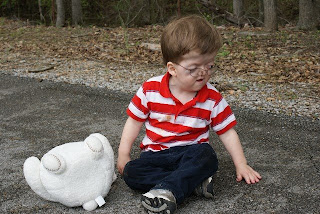 from last year's Beeping Easter Egg Hunt. I was NOT making the same mistakes this year! If he did not want to hunt Easter eggs or pose with his basket, that was fine. We would just enjoy being outside and he could run along the yellow tape to his heart's content. 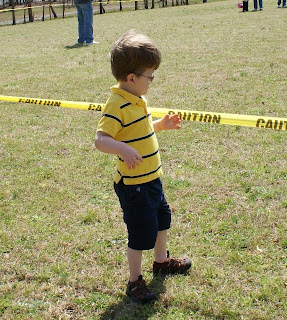 *As a quick aside, anybody notice that my kiddo has had another growth spurt?*
So that's it...I did everything right and we had an awesome time with no issues at all that day! Yeah, right!
Not long after he began running around in the grass, Jack started asking me to carry him. I tried and tried and tried to tell him to walk but oh no he wanted Mama to carry him. I thought maybe it was because the sun was too bright and I forgot his sunglass clip ons. When the sun is very very bright he tends to get clingy or he gets rooted to one spot or the shade. I relented and carried him around a bit until we happened upon the trampoline and he declared, "Shoes off, jump, jump!" as he frantically pushed at his sandals.
He slowly worked his way up to a standing position on the trampoline as I snapped pictures 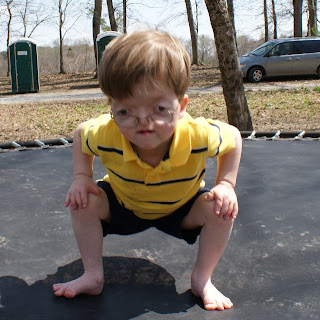 .
That's when I noticed how big (relative to how small they were) his feet are getting. I checked out his toes and sure enough his little piggies were rubbing against the inside of those sandals. No wonder he did not want to walk!
A fairly short time after we started jumping (relative to the amount of time we usually spend jumping on a trampoline every time we get a chance), someone announced that the tactile puppet show was about to start. I'd had my heart set on Jack experiencing the tactile puppet show. I gave him the 10 minute countdown and we went inside where he immediately began fussing about going back outside.
It was a bit loud with the live music and people just coming in for the puppet show. I told Jack that this was new and fun. I told him that I wanted him to give it a try before he decided that he did not like it.
A musician brought a drum over and Jack began banging away in about 15 seconds of pure joy but then it clicked...I guess he thought I tricked him. He began getting all upset again and the musician just did not know what to do. Frankly, I didn't either. I was playing all this by ear. I told the musician to go ahead and move on to the next participant since I did not think Jack wanted to play anymore. I tried for another eternity five minutes or so to get Jack to calm down and feel the puppets but he just wasn't having it.
A sympathetic mom offered that her son also gets overwhelmed in large noisy crowds like that one. While I thought that some of it was tantrum (about wanting to be outside), I had to agree that the environment was a bit overwhelming. I took him just outside the door in hopes that he would calm down enough to return. He did calm down but he wasn't going back and that's when we headed for the swings and he was happy again.
So where's the therapy in all this? Well there was the new experience, the jumping, the running around, the listening to instructions (sort of) but mostly there's the review....overall Jack had fun. I know the parts that he enjoyed the best. In review, I can tell you where I went wrong--too small shoes, no sunglass clip ons, not really giving him clear information about the puppet show and how there would be lots of noise and lots of people. Each time, we try something new it prepares us both for the next time we have that experience and if I take the time to review what went right and what went wrong, then I can do a better job the next time. I'll never anticipate everything. I'll never get everything right. It's part of the parenting journey. And now I'm a little further along on the journey. Each experience better prepares for the next especially if we take the time to think over just what happened.
Next time an event doesn't go like you planned, I encourage you to take a little time and review.
Recent Life is Therapy Posts can be found at:
Boring Life
Spring Break
Code Words
For more Life is Therapy Posts, check out the left side bar.

Now it's your turn to participate. This is where we share our ideas and stories with one another. We're all in this together. Let's laugh together, motivate one another, and stimulate each others ideas. If you have a blog, create your own "life is therapy" post and leave your link in the comments. If you don't have a blog just leave a comment with your life is therapy story.
Posted by Marie at Monday, April 12, 2010

Is the yellow tape the same height? That's a huge height difference in a single year!

We're just about to grow out of our shoes too - I have trouble figuring out when clothes and shoes are too small. That doesn't happen often yet since Elizabeth is growing so slowly so I guess I have time to figure it out!

I hate when I think I've got it all planned out and then... not. Also, I think I get drawn in by words like "Tactile" and "multisensory", when it won't necesarily be right for my kid. Especially if it's loud. And crowded. And unpredictable. So yeah. I hear you.

Sarah and the Gentlemen said...

Well, I'm glad he had fun in spite of the setbacks and surprises. Outside is the only place my boys want to be these days!

There are always wins and losses in anything new - but the real win is realizing what to do better next time! I think you did great!!

Love the trampoline picture. I can definitely tell Jack has had a growth spurt, my gosh.
His poor little piggies...
sounds like a wonderful event...maybe next year he'll want to participate more.
xx