The Apple of My Eye, His Eye, and an Apple Pie

Jack continues to amaze us. We are fortunate enough to live in a swim and tennis community in the southern United States where the summer sun does not even begin to set until after 7 pm. Jack absolutely loves the water. After work this evening, while supper cooked in the crock pot, we headed out to the pool. After about an hour of just generally splashing around, we decided to see if we could get Jack to float on his back (wearing his float suit). It took a few tries to get him to relax. Then suddenly he was floating for a few seconds at a time with no hands on him or under him. The awesome thing about this is that is exactly what he needs to learn to do in case he ever falls or jumps into the water by himself. I think if we work on it we can get him to jump in the pool and turn over on his back all by himself before the pools close for the season in October. (Yeah, southern summer lasts forever once it comes.)
As dusk approached and all the other swimmers headed home to get supper started or to get ready to go to school in the morning, we removed Jack's float suit and let him play on the steps. This is pretty much the only time of day he would get those steps all to himself. He crawled and floated around the steps for about 15 minutes. He was actively putting his hands on the steps and allowing his lower body to float up as he lowered his face in the water and breathed out blowing little tiny bubbles in the water. Once he actually lost his handhold on the step and he was completely floating in the water. Did he panic? Absolutely not. He just breathed out and regained his hand hold and lifted himself back out of the water. Remember when I said, "he thinks he can swim"? Maybe he thinks that because he just about can.
Okay so before everybody who loves and cares for Baby Jack or is concerned about children and water safety in general begins commenting on how we should be very careful in the water, please know that Jack was extremely closely supervised during all pool activity and while we may think he is a natural we are not planning to allow independent pool time anytime soon. Now, feel better?

Jack saw his ophthalmologist today. He slept fitfully last night so he was really not in the mood for an eye exam this morning. Still he was a little trooper and made it through the exam with a minimal amount of squirming and fussing. Dr. Cogen did not see any signs of increased pressure or at least he did not tell us of any thing like that. He pretty much said that that left eye has always stuck out a little more than the right and Jack has grown and the eye is just kind of more prominent because his orbital bones have not kept up with his growth. We will see an occuloplastic surgeon on Wednesday to talk about what we can do to make sure that Jack's eyes don't become overly dried out by their near constant exposure to air. Dr. Cogen was more worried about some dryness and irritation to the lower portion of Jack's eye than anything else. So that was basically good news.

We have been working on getting Jack to take bites out of pieces of food rather than us cutting everything to bite size. Well it's going a little slow. We've had some success with crackers and rice cakes. Today, we treated him to a hamburger for lunch and I tried cutting it up into thin strips hoping he'd take bites since he could not shove each strip into his mouth or so I thought. He sure can get a lot of food in that little mouth all at one time. Anyway he had to have help biting off the strips of hamburger. But look what he did when given an apple pie! 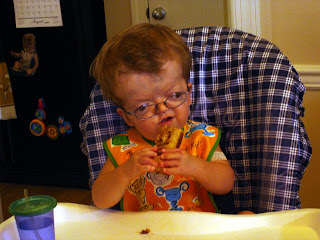 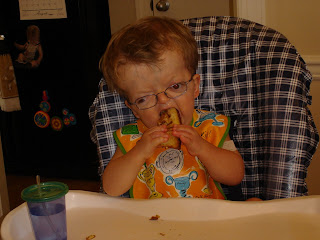 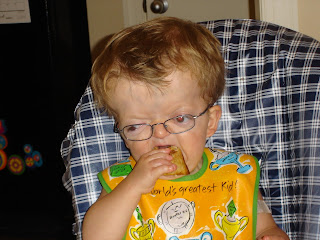 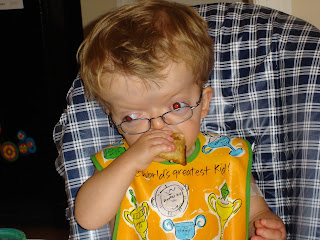 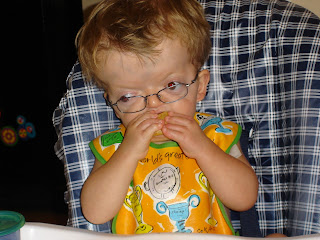 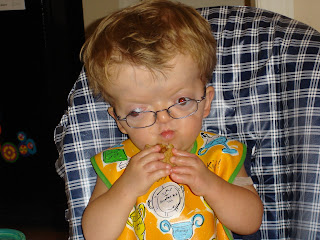 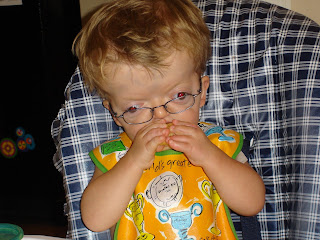 Looks like he knows how to take bites after all.

Hope you've enjoyed this little update. I know that you've all been praying for Jack and I want you to see how happy he is and the wonders that God continues to work through him.

Jack, you are so cute! Mmmmmm apple pie. Wish Cole would wear his glasses as well as you do. Hope to meet you one day. Cole and you may become good buds.