Does anyone know Jack and not know that he likes cars and driving? Here he is signing drive/car while sitting in his car about to take off on a drive. This car was one of the best purchases I ever made. I bought it at the thrift store for something like $8.75 before he could ever walk. He started out just pushing it and graduated to sitting in it while I pushed and now he pushes himself around only stopping to sign help when he gets stuck in a little rut or something. He loves to bump into the house and the poles that hold up the deck (that's okay, right?). 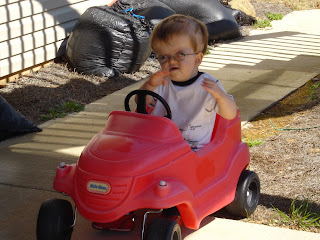 Jack also loves trees. Whenever we are out in our yard, he has to go give our trees (we have two--one in the front and one in the back) a little love. I just thought this was a great picture. He looks so pensive. 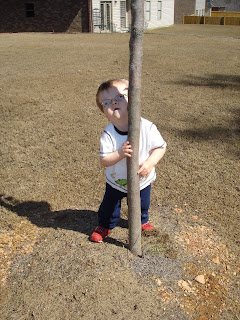 Snow in Alabama! We have such crazy weather here. We woke up to snow on March 8th. That doesn't sound so crazy until you realize that we'd had highs in the upper 70s just a few days before. I was afraid that it would all melt before Jack could get out in it so as soon as we woke up (before coffee or breakfast) I dressed Jack up and we went outside. I was so excited that I forgot that I was not supposed to put anything over Jack's head. 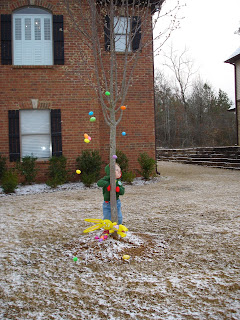 Here's Jack playing with our Easter decorations. Our sweet, crafty neighbors Lexi and Lori decorated our tree for us while Jack was at school one Friday. 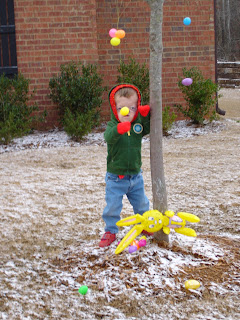 I think this is when I looked at Jack and realized, "Hey your head is all covered up and Dr. Wellons said no hats or head coverings of any kind." He was not happy about going back inside but it was cold and I could not let him hang out without any breakfast and nothing on his head. How do you cover up ears without a hat? I tried (on another day) to tie a scarf just around Jack's ears and all you could see was the top of his eyes peeking out. It just didn't look safe. :) 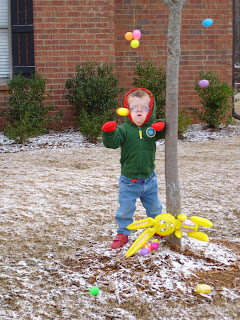