And you thought we knew how to party.....

When I say birthday bash, I really do mean birthday bash and I think that everyone has a good time at our parties. Well, our so called friends* very dear near to our hearts keeping up with the Jones's* friends could not let our humble little backyard pool party go down as the best birthday party of the year. No way, nothing doing...Sophie and Sidney share August as a birth month. This year Sophie is one and Sidney is three. No humble little backyard party for them, unh uh.... 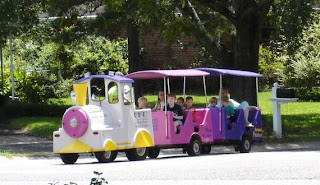 There was a train 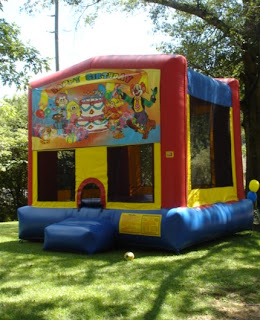 AND a bounce house 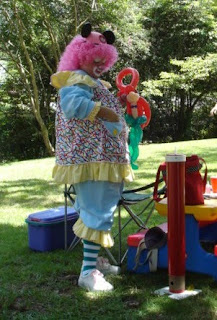 AND a clown who was hilarious and made the most amazing balloon creations all out in their front yard!!!
Jack and I arrived slightly more than fashionably late because well I don't remember and then he fell asleep in the car about 10 minutes prior to our arrival so this is how he spent our first 30 minutes or so at this fabulous birthday bash 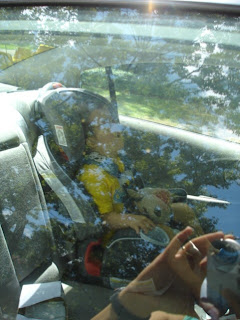 . He was relaxed with his dog in his lap, the air conditioning on, and listening to Beethoven while in a peaceful slumber. After his nice rest, it was a topsy turvy world as the normally very personal space conscious Sidney kind of gestured as if to say "Hey man, how 'bout a hug?" Jack was still in his I'm not quite awake yet mode. It was really surreal to see Sidney try to give Jack a hug and see Jack trying to get away. It's usually the complete other way around. I think Kyle got a better picture than me but this is what I got.... 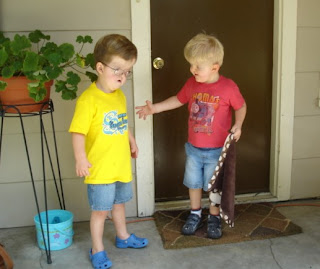 Sidney was such a cool little host at his joint birthday bash with his sister. And why wouldn't he be? Did I mention the train?!!?
Here is Sidney ringing the bell.... 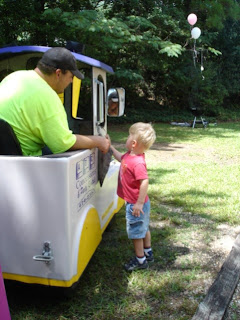 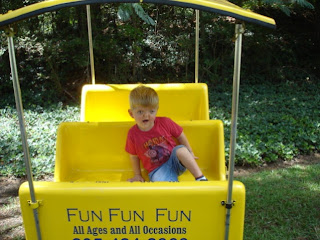 .
Of course, Jack and I rode the train. I forgot to ask someone to get a picture of us riding but this is the picture I took while we were on the train. We rode in the back. 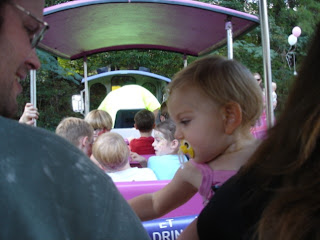 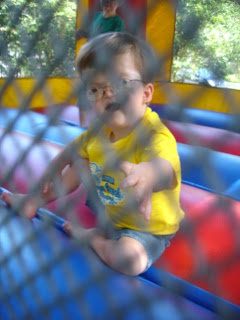 We jumped and ran and bounced in that thing until I thought surely I can move no more. We literally bounced in it until the guy took it down. I wish I could have gotten pictures and us and Sidney and his Nana jumping together. I am quite the veteran of bounce houses since Jack loves them and loves the company of his Wawa in them. This thing was a quality bounce house. I was telling Sidney's Nana how fortunate we were that it was so well constructed so that we did not have to work so hard to get a good bounce. I was trying to give her tips on energy conservation so that you don't get hurt before the kiddo wears out but I think she hurt her shoulder from all the bouncing. Don't worry though, Pat! Sidney had so much fun in that thing that I think you'll get plenty of bouncing practice in the future! :)
Sidney and Sophie both enjoy opening presents so they had a great time getting into all their loot.... 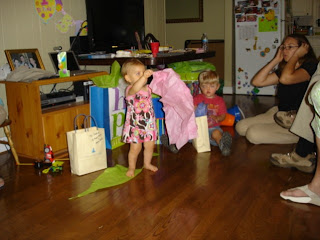 Look what somebody made for Sophie.... 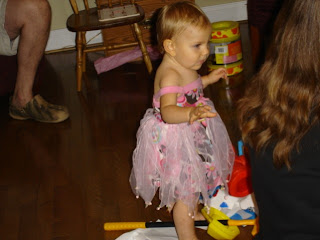 She was so prissy walking around in that thing! So A-D-O-R-A-B-L-E!!!
Sophie liked the bag that we gave her 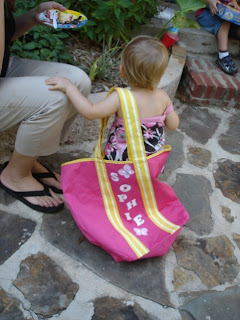 and Sidney enjoyed the play food we brought for him 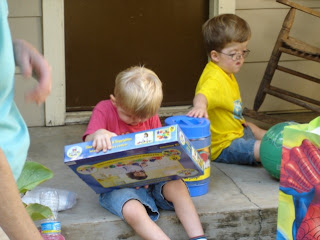 .
It really was a great party. I think every kid there had a huge smile on his face nearly the entire time. Thanks for the invite, spotlight stealin' Rock star wannabe* friends!
*Y'all know who you are and you know we love you to pieces. Our lives would be incomplete without you but quit trying to show us up! Just kidding. Smooches!
Posted by Marie at Wednesday, September 09, 2009