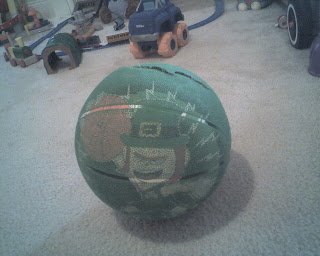 Oh the agony! It happened as if it was slow motion. I told Jack to hold tight to Irish while Mama went to get him some bug spray. I turned around to get the spray out of my trunk while Jack sat with Irish on our driveway. Jack spun Irish and Irish got just beyond his grasp and rolled down our inclined driveway out into the street. Irish bumped up over the sidewalk and I thought we were in the clear but then just as our neighbor pulled past Irish darted back out into the road under her rear tires. I was hopeful and thought maybe Irish would end up between the rear tires and roll out the back where the neighbor behind her would see him and stop. Alas, the deafening loud pop let us know that Irish was severely injured.
I was in shock. I wanted to cry. Would Jack be okay? Irish goes EVERYWHERE with him. Irish is his lovey. Irish comforts him even at school.
After the cars passed, I grabbed Irish and examined him. He has a severe laceration. I wanted to try supergluing it back together but after consulting with David and Grandma I gave up that idea.
Sweet, sweet McCahill called and said that he heard about Jack's Irish and he wanted Jack to have his ball--an Irish twin. What a great solution! I started out telling Jack that Irish was hurt and we needed to fix him but that felt soooo wrong.
I had a little talk about the difference between people friends and pretend toys. I reminded him that he knew that Irish really isn't a person and that we only pretend that Irish is a person. I told him if Irish was a person then Irish would go see a doctor or go to the hospital to get taken care of. Since Irish was a toy that was broken and there was no way to fix him, his cousin McCahill was going to let Jack have his Irish and we would buy back up Irishs in case anything happened to McCahill's Irish. I emphasized that Irish is not a real person because I felt it was important for Jack to understand that Mama and Daddy did not think people who have hurts/injuries/problems were replaceable like a basketball.
So what would do you think?
What would you have done?
Comment away!
Posted by Marie at Tuesday, September 08, 2009

our son brendan had "turtle" a stuffed bigger ty beanie thing, that he LOVED, slept with, sucked his thumb with, so you can believe he was stinky. I tried getting a "look alike" so i could swap out to wash. brendan knew that it was not "his" turtle. needless to say, brendan is 7 and his beloved turtle sleeps in a special box in his closet now. he will probably never get rid of it. i remember worrying all the time, where it was as not to lose it. Such a cute story marie!