IF PICTURES OF WOUNDS MAKE YOU SICK, SCROLL PAST THIS POST AND THE NEXT 5 PICTURES QUICKLY.
This is the wound that started it all--Jack's "old" (placed 1/30/08) VP shunt incision. When David took Jack to his two week wound check, he noted a little bit of clear drainage from one end of the incision. Our family doctor thought that it might just be Jack's body reacting to the dissolvable sutures. He told us to cut the sutures while Jack slept and clean the incision. This picture was taken the night I cut the sutures and cleaned up the area. 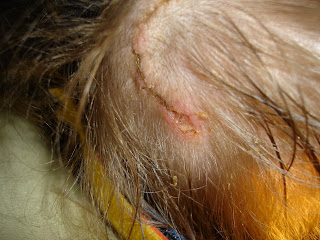 This is how the incision looked as it healed. 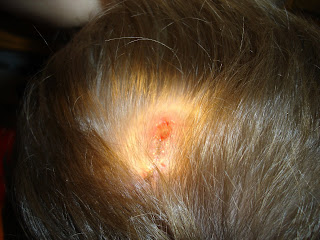 Then it formed a scab. I sent these pictures or similiar ones to Dr. Fearon and he said to leave the scab alone and see how it heals. 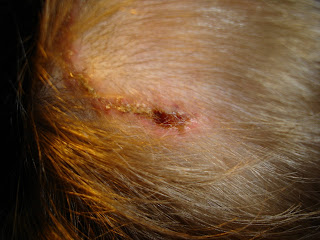 Now, this is the picture that got all the attention. See the splotchy pink area above Jack's incision? The pinkness around the incision was not a big concern. That other splotchy area is what caused Dr. Fearon to alert Dr. Price who told us to take Jack to our local Children's emergency room. 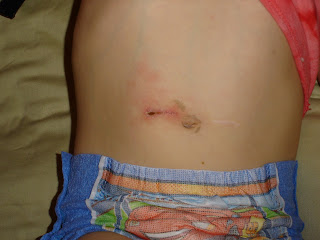 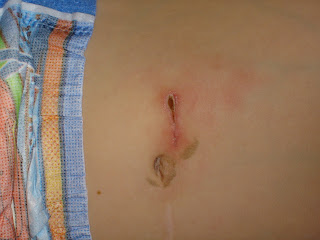 By the time, the doctors at the ER examined Jack, this area was fiery red and hot and Jack would not allow anyone to touch his abdomen.

man he's a trooper. he must feel like a pin cushion sometimes :( glad to hear he's home and doing good now. hugs from sid & family. :)