We started Friday after school hanging out with Jack's cool cousins McCahill and Jeanie. Too bad I did not get any pictures from Friday afternoon. We had a great time. We met them where they were picking pears to make Grandma's delicious pear preserves then McCahill cleaned out their pool so we could go swimming. We swam while Grandma fixed everybody some delicious German food--schnitzel, fried cabbage, and german potato salad. Yum, yum. By the time the food was ready, Jack's Aunt Bobby and Uncle Rob came home. After dinner, Uncle Rob entertained Jack with some silliness that got him to guffawing and Rob was thrilled.

On Saturday, we planned to go to this educational supply store that sent me an email flyer saying that McGruff the Crime Dog would be there. We went and bought a triangle (the musical instrument), a bell, and a magnetic Mr. Potato Head with our $10 gift certicate plus $7 for the overages and taxes. But there was no McGruff. I asked and the store employees had no idea. What a bummer! I had promised Jack we were going to go see the big dog and he was very excited.

I'm actually glad it did not work out, though. We ended up going to hang out with Sidney and his folks instead. Sidney and Jack swam in the pool until Sidney was so worn out that he actually fell asleep just being held upright in his Mommy's arms. While Sidney slept, Jack rode around on Sidney's plasma car. Since Jack liked it so much, I asked where to get one and lucky for us, Christie had seen one at a consignment shop the day before. We ran right out and bought it. When Sidney woke up, we all headed to the nearby park. 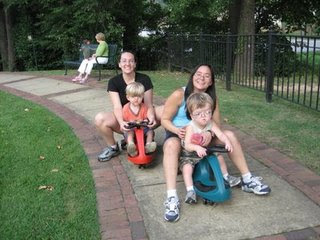 Sophie and Nana came too but they were chillin' out on a park bench while Jack, Sidney, Christie and I were riding the plasma cars and racing a little boy named Brendan who told us to call him Jones. Brendan/Jones--we did not really care what his name was. We just knew that he was a super cool kid who wanted to play!

I borrowed the Signing Time DVD Zoo Train from our local library since Jack loves animals. He loves watching the video and remember we got the zoo pass for Jack's birthday? This morning, we headed out to the zoo. Jack really enjoyed riding around in his little car. 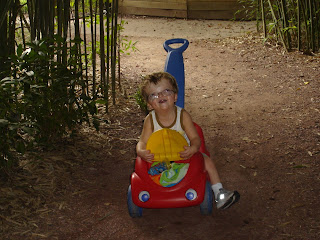 He looked at the animals a little but I think riding around in a new environment was fun in and of itself. I am hoping that he'll pay more attention to the animals next time.
He enjoyed riding on the train 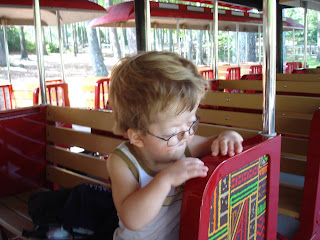 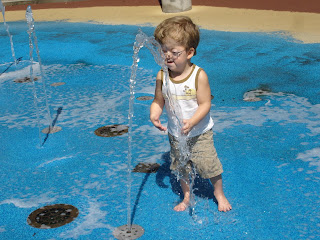 splashing in the water!

We finished up the weekend by going to our home church where we found Michi waiting with delicious dairy free cookies who was not to be outdone by Pop who took Jack outside to play on Ms. Donna's porch.
Posted by Marie at Sunday, September 07, 2008