Breakfast for a Man-Boy 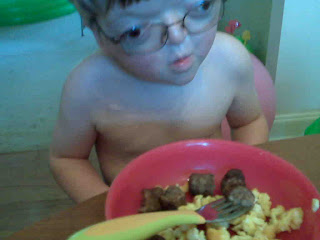 I jinxed myself a couple of weekends ago as I told my friends how easy Jack is to feed. He has so much congestion that I am not sure he can really discriminate a whole lot between different tastes. His only pickiness revolved around texture. If I could get things the right texture, he would eat them--not always self feed but he would eat.

I continued on telling them how great and easy it was that he would still eat "baby oatmeal" for breakfast every morning. You know the stuff loaded with vitamins and minerals and fiber? "All I have do is add some fruit purree and water and he gets a great start to the day!" I told my friends. Well, shortly after that Jack was pretty sick with an ear infection and would not eat much of anything. As he has recovered, he has slowly but surely begun refusing all such "baby food".

*sniff, sniff* My baby boy is growing up and he is eating like a man!

PS He requested cheese puffs and chicken sticks for breakfast. I politely declined and offered eggs and sausage. As a compromise, he did get his two potato rolls.