Even Breakfast is Therapy 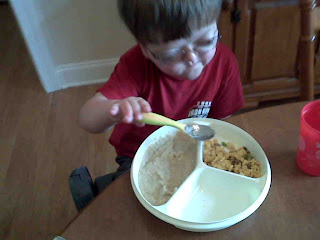 Jack is great with independently feeding himself finger foods. Utensil use, however, has been a challenge with the exception of his morning oatmeal. At least part of it has to do with his fine motor challenges--small hands with fingers that don't bend.

However, it also recently occurred to us (DOH!) that it is also a visual challenge. Jack has not yet learned to completely accomodate for his lack of depth perception. He often does not use his vision in fine motor tasks--kind of like his brain decided it was too difficult so it took the path of least resistance--and instead feels for things rather than looking.

It occurred to me that he does absolutely fine scooping his oatmeal so perhaps we should try making all of his food spoonable and putting it into a bowl. This worked pretty well for foods that were okay to get mixed up like your meat and veggies. But not so well when things like oatmeal and scrambled eggs with cheese, mushrooms, peppers, and onions got mixed together. Jack wouldn't eat that. (Who blames him?)

Enter the divided plate. We have a bunch of these from taking lunches to work. They are great because they have high sides for ease of scooping and they keep foods seperated.

If you've got any tips for teaching utensil use to a child with fine motor issues or a visual impairment or both, I'd love to hear them!

This message has been sent using the picture and Video service from Verizon Wireless!

To learn how you can snap pictures and capture videos with your wireless phone visit www.verizonwireless.com/picture.

Note: To play video messages sent to email, Quicktime@ 6.5 or higher is required.

My girls insist on divided plates. They don't want to get their food
mingled together. Little do they know it just ends up that way anyway.

Bravo for using your noggin on this one, mom!

That's a toughie all around. I waited forever to get Ali to use utensils (especially spoons) because it was just so darn messy!!! Bad me...bad me.

Very smart use of the plate. Especially with those high rims for pushing food against and up. Its also great for him to aim at the exact food he wants.

have you checked out www.therapro.com? they have 'built up' utensils that might be helpful to Jack. they also have all sorts of divided plates and scooper bowls.
as far as the visual piece, if you can use red and yellow (the easiest color to see and distinguish) plates or bowls, that might help with meal time. even a bright colored placemat might help.