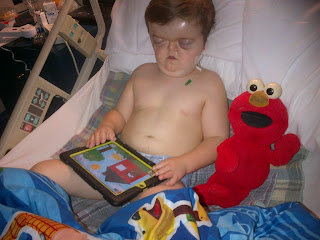 After the wagon ride, we both took a gloriously long nap. Jack woke up before I did and has been trying a bit more to play some of his ipad games between watching his favorite episode of Sesame Street and sleeping. It takes some serious skill to play a matching game with one little slit of an eye open.

For all you pajama fans (like Alicia!), Jack dislikes pajamas. I only get him to wear pajamas to our Smith family Christmas party. That's why he's wearing regular clothes or not wearing any.

Did I mention earlier that Jack's left ear culture came back positive for fungus? We're treating it with an anti-fungal powder that we "gently puff" into his ear.

We had a pleasant surprise this evening when our friends Margaret, Elizabeth, and Catherine stopped by.

After our friends left, Jack's temperature went up a little (100 degrees) and he said that he was hurting so we got him some tylenol.

He also developed a fairly noisy expiratory wheeze and a cough so I requested that we get proactive rather than reactive and requested a respiratory treatment. He hasn't had it yet but is sleeping pretty soundly and sounds pretty good.

Sent from my Verizon Wireless BlackBerry
Posted by Marie at Thursday, October 25, 2012