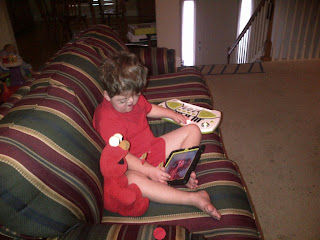 *The picture looks a little odd because I "colored" over Jack's underwear to accomplish David's request that I not post any more pictures of Jack in his underwear on the internet. I'm sure when Jack is older he'll appreciate this.*

Jack has four great non-people loves--Irish (his green basketball), Elmo, his Ipad and music. David and I do our very best to encourage and support his interests. The problem is that we are not particularly musical. I like to sing and I've "played at" teaching myself to play the piano off and on over the years. David likes to sing some or at least does it by request of his adoring boy. But we're just not that good and we aren't very rhythmical.

Enter the itikes piano! I did not know such a thing existed but when I saw it and devoured all the information on the box declaring it developmental, educational, and a great fun way for children to learn how to play the piano using an Ipad, it just wasn't possible that it wouldn't land in my shopping basket.

Close family members who know Jack well know that Jack is not usually keen on "new". Not so with the new piano! This morning, I brought out the keyboard again and Jack began playing the ABC song. I walked around from the kitchen to complement his efforts when I realized that he was playing not with the Ipad app but while watching a YouTube video and not even looking at the keyboard. To be fair, he did not learn this song from the app. He already knew it but I've never seen him play it without even looking!

I guess he's surviving in the musical desert after all.
Sent from my Verizon Wireless BlackBerry
Posted by Marie at Wednesday, October 10, 2012