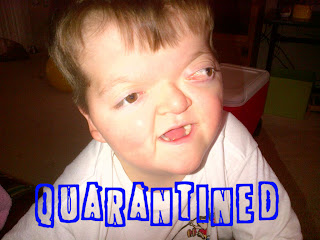 It's been over 3 (nearly 4) glorious years since we've had to do this. It feels like unfamiliar territory. Well it is, really. Jack was only 3 years old last time he had surgery and that last one was just replacement of ear tubes and an endoscopy. I don't even remember if we actually did a quarantine since he wasn't having major surgery and he was attending our local public preschool program.

However, 'tis the season and we've heard that our local public schools are already seeing the flu, strep, and mono. Jack's been a little "snotty" but we're hoping that it's his seasonal allergies acting up. In any event, we've got to make sure that he does not get any worse prior to his cranial surgery.

So if you're used to seeing this smiling face around town, you won't be seeing him again until after surgery. We'll get outdoors but we won't be planning any meet ups or get-togethers. We'll miss y'all!
Sent from my Verizon Wireless BlackBerry
Posted by Marie at Monday, October 08, 2012

How long until surgery? And how big is this surgery? Should I know this already???

Surgery is two weeks from today. He's having an anterior cranial vault--a surprise, you know, the kind you don't like. His surgeon is concerned about increased pressure on his head. Dr. Fearon noticed how tall Jack's head is growing and he believes the skull is being pushed upward by internal pressure. The vault will open up his skull making more room and keep the pressure from pushing inward on his brain. Scary stuff, either way!