He's just so cute that I had to post some more pictures of Jack having fun.

First up, we finally put together the Thomas the Train set that Santa brought for Jack at Christmas. You'll recall we spent Christmas Eve night/Christmas morning at Children's ER so we were in no shape for toy assembly when Jack got his gifts. We just kind of set it aside and well, we couldn't stand it any longer and it looks like Jack really enjoys it. 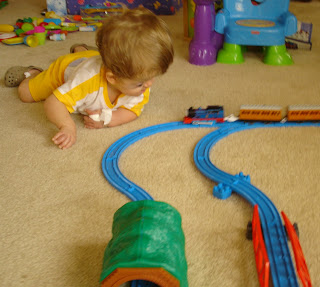 Next, who says recycling can't be fun? I took our old baby pool that doesn't hold air so well anymore added a less than $10 bag of balls from Wal-Mart and voila, it's a ball pit! 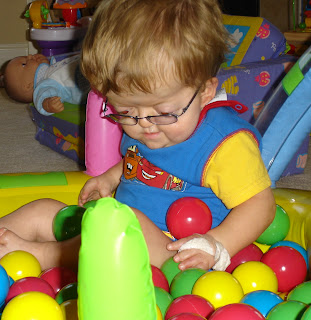 Well I hope you've enjoyed the latest installment of World's Best Cutest Baby According to His Mom! :)
Posted by Marie at Sunday, July 22, 2007