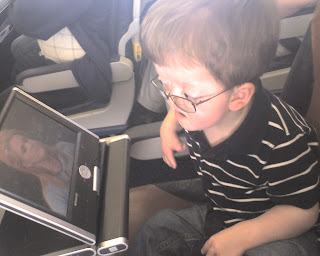 It's been a busy week and I have not had a chance to update regarding our recent visit with the low vision rehabiliation specialist. Dr. DeCarlo was able to test Jack's vision using a couple of different tests. She says that the tests tend to overestimate vision but it's the best indication we have until Jack is able to do some of the other tests. Jack tested as having 20/300 vision or perhaps a little worse. That meets the definition of legally blind. Dr. DeCarlo explained that colors appear muted to people who have vision like Jack so Jack cannot distinguish things like gray letters on a white page. He needs bright colors with sharp contrasts but also not too much visual clutter since it can be overwhelming. He will eventually need magnification to help with reading but because Jack is so young, Dr. Decarlo recommended having Jack just look close up at things in isolation for now. As
he gets older and has more complicated lessons at school that will be a bit harder. We look forward to receiving her report. She provided a lot of information and it was hard to take it all in. So how does Jack feel about being legally blind? Uh....I think he was just waiting for us to catch up. He deals with what he's got. No wonder he doesn't like to color! :)
Posted by Marie at Sunday, February 15, 2009

Marie - sorry to hear about the news with Jack's vision - but like you said, he's adapted well so far so hopefully he will continue to learn to do things each and every day!

Hope to get together while we are in Dallas this week. We arrive on Tuesday, sleep study Tuesday night, pre-op appts. Wednesday, surgery Thursday. Think we can sqeeze something in? Let me know!