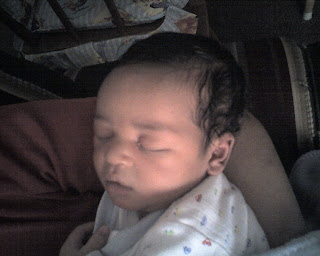 Since he's been out, Joshua's been kind of quiet so they haven't really played together yet. Look for more pictures of Joshua as he gets older and they play together more.

Here's what Jack's been doing over the summer--chillin out at home. Doesn't he look absolutely relaxed? 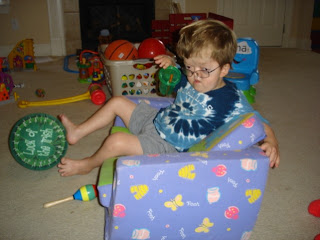 David is quite good at catching our local wildlife in pics. Here are two giant red-headed woodpeckers hanging out on the same tree! This was right outside our back door up on the hill behind our yard. You may remember the deer. This is the same area. Who knew we had so much wildlife around here? 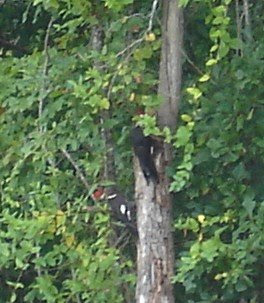 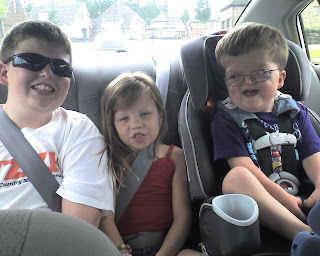 Jeanie and McCahill rate us a big "thumbs up!" 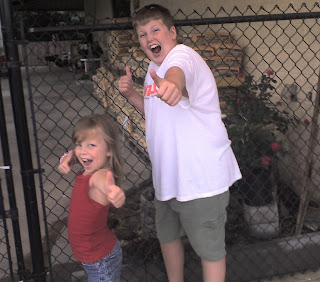 We had dinner at a local pizzeria where we all enjoyed some excellent pizza. Mmmmm....just ask the kids about the dessert pizzas! Next we picked out a couple of movies to rent. Jack did not really care which movie we picked as long as Jeanie and McCahill were coming home with us.
With the assistance of another local video renter, we avoided renting a movie that was "too much for the young crowd you've got!" We settled on Open Season 2 for tonight's viewing pleasure. It was fun and very appropriate for our little crowd. The kids decided that they really did not want to keep the air mattress in the spare bedroom/playroom. They pulled the air mattress out into the living room and sort of bounced around on it and ate popcorn while watching the movie. 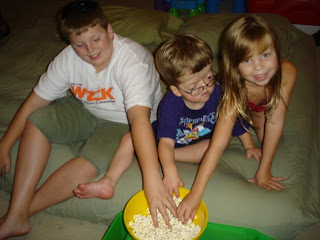 This is the way all the kids wanted to sleep. 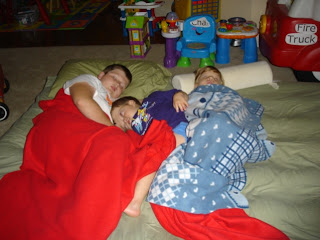 We had to remind Jack and the other two that Jack needed to sleep in his bed with his Bipap, oxygen concentrator, and pulse oximeter. Sweet McCahill tried to tell us that we could just bring all the equipment out to the living room and he would hold Jack's mask on him all night if necessary.
So the plan was that Jeanie and McCahill would sleep on the air mattress out in the living room while Jack slept in his bed in our room. We told them that if they needed us at all during the night to just come on in. I wish I could capture in one picture how our sleeping arrangements ended up. It's a good thing we've got a fairly large bedroom. Jack is in his toddler bed which is against the wall on one side and next to our bed on the other side. At the foot of the bed is the air mattress with Jeanie and McCahill. So sweet!
Good night, everybody!
Posted by Marie at Wednesday, July 29, 2009