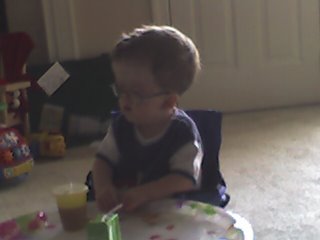 First to answer the number 1 question on everyone's mind: last night was much better. Jack dropped his oxygen level about once every hour to hour and a half but only once instead of in a little series like he has been doing. He dropped, rebounded fairly quickly and then did not drop again for 60-90 minutes. I think we've got the settings right. Personally, I think we just need the increased back up rate because that's what kept Jack from having the longer apneic spells. Now we just have to get him use to it. He woke up several times and I had to soothe him back to sleep. We managed to keep the mask on until about 430 am and I put it back on again after he went back to sleep. Today we are battling snot. Could it be from the teething,an accidental dairy exposure, being in the yard all day yesterday, does he just have a little cold? The mind reels. I think the teeth coming in are really
plaguing Jack today so right now he's having some juice and graham crackers to soothe the savage 22 3/4 month old.
Posted by Marie at Saturday, April 21, 2007