Happy Easter, everyone! Jack had a rough night with the CPAP. He woke up a few times but now I'm not really sure that it's the CPAP mask waking him up. He is still desaturating (dropping his oxygen levels) and I think it may actually be waking up with the sensation of not having enough air PLUS having a mask on that is scaring him. This morning he woke up wearing the mask and simply sat up and looked around while wearing it. It sounded kind of like someone wearing scuba gear. He was not upset at all. He just sat and breathed and then he kind of motioned and grunted for me to take it off so he could drink some milk. It's progress!!!! We follow up with Dr. Lazano this Tuesday so he'll probably make some changes. 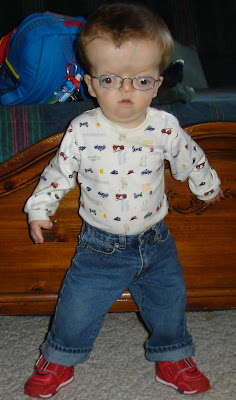 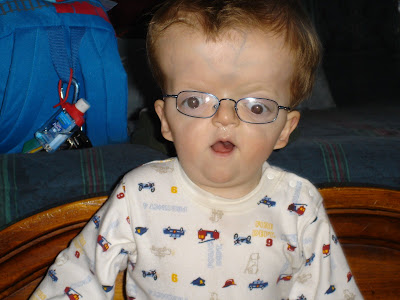 Did you see those red shoes? His favorite color is red and it just so happens that the shoes we found that would go over his orthotics are bright red. What are orthotics you ask?

I copied this from Wikipedia:

"Some professionals choose to use the adjective orthotic as a noun, usually describing a foot supporting device or insole. Orthosis (plural: orthoses) is the base word for orthotic and is grammatically more apt to describe the items or devices that provide direct contact with a portion of the external body surface, rendering resistance to unwanted movement. All orthoses are fabricated prior to or concurrent with being delivered or fitted to the person using them, even casts- as they are created on the patient and become effective for use prior to being used by hardening. Some of the devices are made or fabricated with specifications that derive directly from considerations of a single person end user. Some orthoses are made to fit by sizing; e.g. small, medium, large

Foot Orthotics
Podiatrists, physical therapists and sports medicine practitioners will often prescribed custom foot orthoses as part of a treatment regimen.
They are prescribed to:
Reduce the symptoms associated with many foot related pathologies.
Provide support
Accommodate foot deformity
Provide better positioning
Relieve pressure on a certain area of the foot
Improve the overall biomechanical function of the foot and lower extremity"

In Jack's case the orthotics provide support and improve the overall biomechanical function of the foot. Without them, he tends to walk on the inside of his feet which causes balance problems and Mary Beth, one of his physical therapists, tells me that if he does not wear them the muscle will get stretched out as he is growing and that would cause more problems later on. Anyway, we just started trying to get him to wear them again and he is already doing great with them on. He has taken some independent steps with them and he spontaneously let go of me and just stood in one spot wearing the orthotics. YAY Jack!

Also, while watching Baby Signing Time in the car today, Jack said dog. Then in the tub tonight I was trying to get him to say dog again and I was saying "dog woof woof" and he said "oof oof" a couple of times repeating me!!!

It's exciting and exhausting times around here....Happy Easter!

Hello all, It is good to see pictures of Jack. I am also glad to see everyone made it through Easter. I am sure Jack had big fun gathering up eggs and what not. Sorry to hear you had a hard night, but with every hard night I pray you have 10 great nights. Keep your spirits high and as you know things will improve. I hope all went well with the doctor today. Cant wait to read more tomorrow.

Jack is looking so "grown-up" here! I love his red shoes!