Life is Therapy--Learning from Others

New to the Life is Therapy series? Here's a quick blurb to tell you what it's about:

Some children seem to be born social. They will allow anyone and everyone to hold them and they quite naturally capitivate everyone with sweet coos and smiles. However, not all children are that way. Some children can take quite a while to warm up to anyone that is not Mom or Dad.

When Jack was first born, it was very difficult for me to allow anyone to hold him. I found it especially difficult if he started crying at all. The problem is that he almost always started crying the minute someone unfamiliar held him. AND everyone other than me or Dave was unfamiliar.

Here are a couple of rare shots of Jack and his Uncle Rob (and cousin McCahill) taken shortly after Jack came home from the hospital. 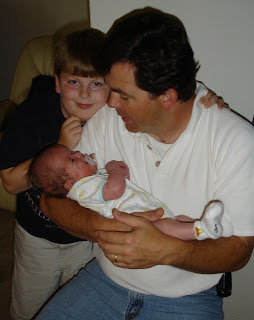 Just after this picture was taken, Jack began screaming. Rob is a wonderful father of two children. He was familiar with crying babies and he shifted the way he was holding Jack in order to get him more comfortable and to comfort him.

Unfortunately, as a new mother, I did not quite get all this and "rescued" Jack from his Uncle shortly after the crying started. As Jack grew older and began to attempt to communicate, I continued to hover and interpret. I was fearful that someone would miss his attempts at communication and therefore not ackowledge him and make him less willing to try again.

The wonderful lesson that I got when Jack began attending "school" without me is that he certainly could and did communicate on his own and that he and others could bond and understand one another.

Over time, I have begun to let go a bit more. Jack is remarkable in the ways that he communicates his thoughts and intentions to others. Don't understand his words? That's okay, he might try signing or push you or pull you where he wants you to go.

The other night, when we gathered over at Rob's for our family Christmas celebration, all the children were once again running around. Then I noticed that Jack had disappeared. He was not with all the other children.

Imagine my delight when I found this..... 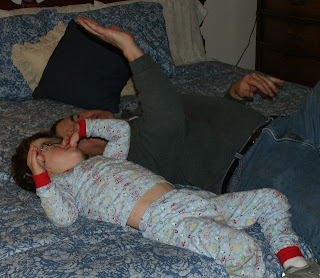 Jack and his Uncle Rob were studying what happens when you put your hand up and wave it in front of a moving ceiling fan.

We had seen Jack laying on the floor at home, looking up at the ceiling fan, and waving his hand in front of his eyes. We wondered where he had gotten such an idea. Turns out that his Uncle Rob showed him this nifty trick on Thanksgiving. 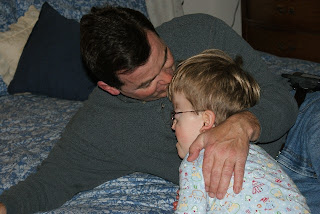 So, I encourage you. Give your kids and your relatives a little time and space, who knows what they will each get out of it?

Recent Life is Therapy Posts can be found at:


What's in Your Child's World
Setting Goals
Videos
For more Life is Therapy Posts, check out the left side bar.

Now it's your turn to participate. This is where we share our ideas and stories with one another. We're all in this together. Let's laugh together, motivate one another, and stimulate each others ideas. If you have a blog, create your own "life is therapy" post and link to the specific post in the Mr. Linky below. If you don't have a blog just leave a comment with your life is therapy story.

I've been reading your series now for a couple weeks and just now read the 'why' of the series. lol.

That is so true, and unfortunately, a lot of parents aren't actually 'bogged down'...they are completely lax in doing the parenting themselves. UGHHH!

With that said, lol...I loved loved LOVED this post and the pics. You're such a wonderful mom that it makes me all teary eyed. (no, seriously)

I think I'm gonna try and do this meme next week. Is it always on tuesdays? Are my kids too old? lol.

oh I loved that you found Jack with his Uncle Rob! Sweet pictures!!

I used to hover a lot over Kayla when she was younger too, much more than I have/do with Lucas! And I don't think it was all about being a 'first time mom' either - I think it had to do with the 'special needs' part of it!

What an awesome point! I love it - and it's so very true! It amazes me all of the different perspectives that Ali picks up when she visits Gramamma and Pop's house...

Sheila--thanks so much! No one is too old for Life is Therapy. If she'd do it my grandmother could write a Life is Therapy post on her kids.
Michelle and Rachel--it is so good when we let go, isn't it?