God is Good even when breathing is tough

Jack is having a surprisingly difficult time breathing tonight. He is not currently sick so when he started dropping his oxygen level so quickly after he fell asleep tonight it really took us by surprise. We weren't too worried until we hooked up his Bipap AVAP and the pressure continued to climb as Jack's chest heaved in an attempt to take in air. Every single breath was requiring all of his breathing muscles. We watched kind of stunned as his chest would sink in deep with each attempt to pull air in. We turned his supplementary oxygen up higher and higher just trying to keep his oxygen levels up while we waited for the Bipap AVAP to reach a level where it was adequately keeping Jack's airway open. I said to Dave, "Of all the stuff we do this sucks the most. Who wants to watch and wait while their child struggles just to breathe?" I was angry as I prayed and then I remembered the song that has been stuck in my head for a few days--While I'm Waiting by John Waller. It struck me that I, like so many mothers of children much more fragile than Jack, was waiting on the Lord to reveal his glory in Jack's life. My attitude turned toward gratitude as I thanked God for the machine that made it possible for Jack to get enough air each and every night. I began to pray for many of the mothers that I know that are waiting on God to heal or help their children. Hug your children tight tonight and enjoy watching them sleep. God is at work in each little breath and we have ringside seats! 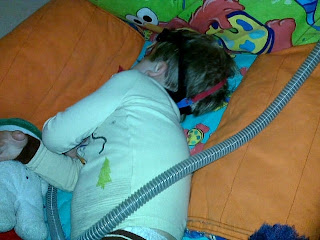 That's an awesome attitude and reminder! I will be praying for Jack's breathing tonight!

Our mother's hearts are consumed with our children, aren't they? And God, because of that love, can make a profound impression on our lives with something as simple as a breath. Of course when they struggle to breathe, each breath is a miracle and a testimony to God always working in our lives.

Thanks for the prayers guys. Once the machine caught up with him, he began to breathe pretty easily. It's amazing. This machine keeps my son alive each and every night. That is truly a blessing and miracle from God!

Thinking of you and keeping Jack in my prayers.
Glad to hear he is doing better.

Watching my girls sleep is my favorite thing in the world.

I'm so sorry that you have to go through all that worry. I can't even imagine.