Halloween 2009--A Lesson in Expectations

I'm going out of order here. I'm behind on posting other recent events but I'm going to go ahead and put up our Halloween pictures. We went to a pumpkin patch again this year. We went back to same one that his school went to last year. I will post pictures from our Pumpkin Patch adventure later. We picked out this pumpkin..... 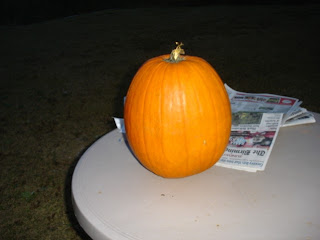 This year, I was inspired by pictures of Kelly's family carving their pumpkins. She posted them on Facebook so if you are her friend on Facebook, go check them out or go post a comment at her blog asking her to put up her pumpkin carving pictures like I did.
Jack's co-teacher, Mr. Daniel, reported that Jack LOVED putting his hands in the pumpkin at school when they carved the class pumpkin. Jack loved it so much that Mr. Daniel got all the pumpkin goo out and set it on the table so that Jack could play with it some more. Ms. Sunny and I were delighted to hear it but very surprised since Jack is very picky about textures and generally does not like to touch gooey things.
Kelly's inspiration and Mr. Daniel's gooey goodness story started a little fire burning in my brain. Oh, what fun our family will have carving a pumpkin this year! I expected that the three of us would get into it together. Alas, Jack just wasn't into it. At first, I thought maybe he was just waiting for the pumpkin goo. I wanted a picture of him marking on the pumpkin to create the template but Jack doesn't like to draw so we just posed this shot. 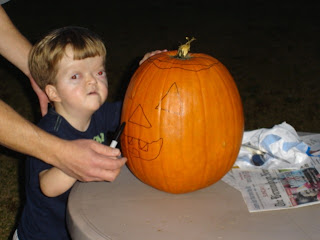 Turns out that Jack wanted nothing to do with our pumpkin or our pumpkin goo. David cut the pumpkin open and we tried to get Jack to feel around the inside but he wanted nothing to do with it. So next I carved out the face I had drawn. It was my first pumpkin carving in a very long time and I couldn't make the teeth so we went for a great big smile.... 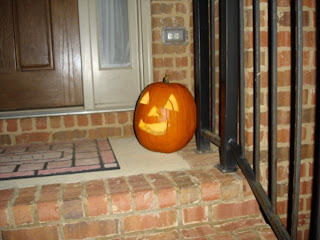 So then I thought well maybe he did not like the plain ol' pumpkin but Jack will be enamored over this pumpkin with a face!
Ummm....not so much.... 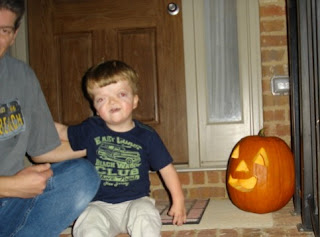 Then David grabbed a candle and lit up our pumpkin. Alright, I thought, Jack's going to love this!!!! Or maybe he'll just love the railing on the porch as usual....I don't think he ever really noticed that pumpkin. But, you know what? He had fun when we let him swing or run around outside after dark. 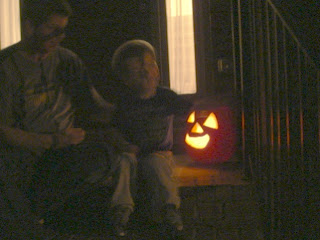 After that picture, we got Jack his favorite dinner (ham buh guhs and pie) and rented Fantasia because we thought we'd all love the music and Jack might enjoy the visuals. Jack did love dinner and he loved walking around outside the movie rental store. Fantasia locked up a bunch (old DVD I guess) but Jack really enjoyed just spending time with his Mama and Daddy. Let it go, I told myself. So what if we did not really do the pumpkin carving as a whole family! The important thing is to enjoy ourselves as a family. It really doesn't matter what activity we do or how we do it, right?
Lesson learned......ummmmm....or maybe not....
I had my heart set on Trick or Treating this year. Jack and I sort of did a dry run when we went door to door selling coupon books. He loved knocking on people's doors and he loved being outside. Perfect! I thought Trick or Treating is going to be the best thing ever! Lots of doors to knock on, other kids everywhere, Yipppeeeeee!!!!
I dressed in a costume that I kid you not had little boys everywhere getting huge grins on their faces, pointing and stammering, "T-t-t-t-t-t-t-homas!" My kid is gonna LOVE this!!!! 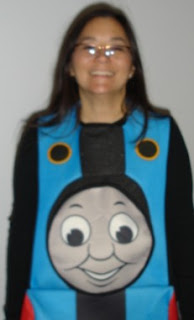 I thought our trick or treating pictures would look like the ones featured here.
Jack had fallen asleep on our way home from visiting with friends (another fun post coming later). I knew it would be a bit of a late evening so I just let him sleep while I put out our candy and got in my costume. He woke up a little ill but I thought once we got started he would cheer up. Alas...... 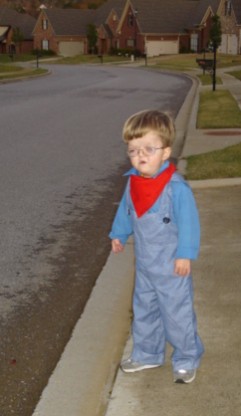 our cute train engineer only wanted to walk in the dangerous road. NOT GONNA HAPPEN especially not in the dark on Halloween.
We tried walking abit but Jack stayed upset and only wanted to be carried. He clearly wasn't enjoying it. I kept asking him what was wrong and it finally dawned on me that it was kind of late and Jack had not had dinner. In my excitement, I had forgotten to plan for dinner. I gave up on trick or treating in the neighborhood and we headed off to McDonald's and our usual Halloween party. 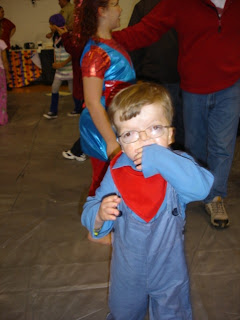 I experienced another "Duh" moment when Jack started chewing his sleeves like his life depended on it. Uh oh, teeth, I think my little guy is getting some more teeth. So he was hungry and hurting upon awakening from a nap only to have his Mama hurriedly rush him through putting on a costume and parading around for the neighborhood. Hmmmm....not your best set up for success.
After the ham buh guhs and running around and seeing the other kids at the party, we found ourselves having a good time after all.... 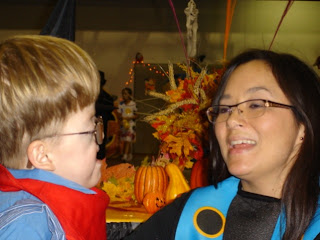 How could you not? There was music, there were other kids and the bouncer..... 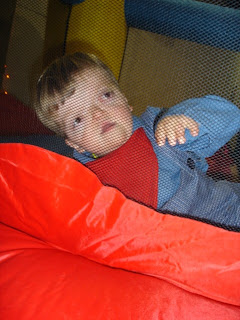 At the end of the party, I took off Jack's costume and we stomped around outside. Look who's having fun now.... 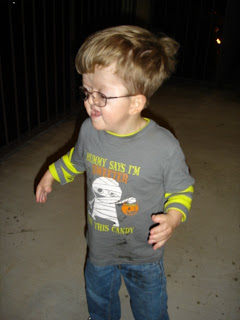 Note to self: Drop the expectations, make sure that kiddo is as healthy as can be, as rested as can be, as pain free or distracted from pain as possible, well fed and well hydrated and just follow the fun. Life is much happier that way!!!!
Posted by Marie at Sunday, November 01, 2009

you're dead on about the expectations. there's what you wish for, and what you get. good thing we have those "A-HA !" moments in between. :)

Love it! I will for sure post my pumpkin pics on my blog. somehow I will figure out how to link to my facebook.....Looks like you had fun!

LOL! That always happens to me - everytime I have huge expectations, Ali always crushes them :)

LOL! That always happens to me - everytime I have huge expectations, Ali always crushes them :)

I found your blog through AL bloggers, and I'm so glad that I did! What a precious son you have!

I totally agree with the "drop the expectations" thing. And the "have fun!" thing! :) I'm really having to work on those two things right now with my stubborn as a mule 21 month old.