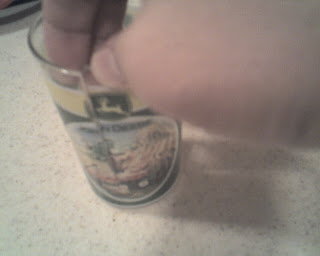 Jack has picked up a disturbing habit. His teacher, Ms. Sunny, told us that he has done this at school but he only did it with her and she and I thought maybe it was because he thought her reaction was funny. Well, Mr. Bad Habit reared his ugly head tonight after dinner. Jack requested some juice for his after dinner drink. He ate plenty of dinner and he looked super cute struggling to get the big bottle of juice out of the fridge and give it to me, so why not? After he finished every last drop of juice and turned his cup up three times to make sure he got it all, he threw it and I mean threw it on the floor. He didn't toss it. He didn't drop it. He threw it on the floor and cracked it TWICE. After he threw it the first time, I gave it back to him and sternly said, "Put it on the table" and he threw it down again (after first checking for juice). I could not believe it! I handed it to
him again and assisted him in putting it back on the table. After taking the pic for your viewing pleasure, the cracked cup went in the trash. Mama is NOT thrilled about this.
Posted by Marie at Tuesday, November 03, 2009