I'll get to the Seeking Sensible Sensory Sensitivity Solutions Speedily in a moment. First a story told in pictures. :) (Story does apply to the need.)
Jack was invited to his self-declared best friend's birthday party. Kimberly is one of the older kids in Jack's class. She just turned 5 and celebrated her birthday at Pump It Up. It was really a blast.
Jack is growing up fast. Here's the look he gave me as we entered the inflatable area where a few of his classmates and other kids were already running around. 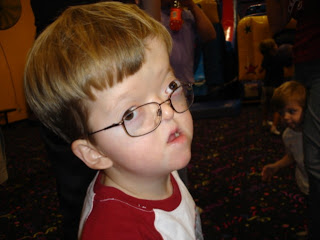 Are you really going to follow me around with that camera?

We started out jumping with everybody else but then....

You've seen pictures of this place before and you've seen this car before. Jack seemed to remember it although it's been quite a while since we've been back. 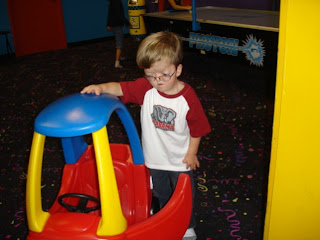 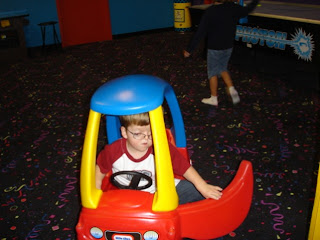 Let's go for a spin!

Once he saw the car, Jack really wanted to drive the car more than anything else. 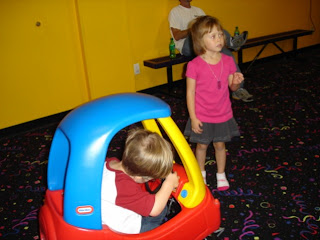 Umm...will somebody please get Jack out of the car now?

With Kimberly's encouragement, Jack did get out of the car again and joined the rest of the party. He was a bit reluctant but really got into the jumping again. Then it was group picture time. 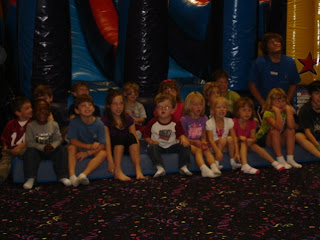 Notice that most of the kids were looking to their left. See Jack? Guess which side I was standing on?

So here's where we get to the Seeking Sensible Sensory Sensitivity Solutions Speedily.

After the group pictures, the children are herded fall in line and run like wild animals walk over to the celebration room or whatever they call the place where they do the food, the cake, and the presents.

I was concerned about how this part would go because:

#1 Jack would prefer to be in the great outdoors at all times (well except every now and then he would like to go inside and watch a dvd). If he must be indoors, he prefers open spaces. Jack does not like small crowded rooms. I don't know if they are too visually cluttered for him or if it's just too hard for him to navigate or he's just claustrophobic but on a bigger scale than his Mama.

#2 Jack does not like really care for pizza or birthday cake so there was little incentive to entice him to go to the room and stay. Well, I shouldn't say little incentive. He did like being around all the other kids. That's how I got him into the room.

At Jack's birthday party last year, we didn't even sing Happy Birthday. This year, we sang quickly and no loud clapping or cha cha cha was allowed. Then I quickly distracted him with Hey, let's have some cookie before he could get upset.

At church this past Sunday, Donna had a birthday and since everybody knew how Jack is we sang it really low so he would not get upset.

Those kind of accomodations don't occur at another kiddo's birthday party and I wouldn't expect it. So everybody sang Happy Birthday to Kimberly and Jack made it through to the very end when he just bawled. I was able to calm him fairly quickly then we said goodbye and made a speedy exit.

Jack likes to watch You Tube Videos of other little kids singing or being silly so I just knew that he would LOVE watching a video of Rachel's daughter, Ali. Adorable Ali was singing to make her mommy feel better. As I predicted, Jack loved it UNTIL Rachel in her delight over Ali's skillz exclaimed, "Yay!" It was short. It was practically not even said but sure enough first he made that face that tears my heart to pieces and he cried. He did not wimper. He did not sniffle. He cried hard. The kind of cry that leaves you gasping for air.

This absolutely breaks my heart for him. There are just certain sounds that he does not tolerate from the human mouth. It's not even that he does not tolerate them. It appears as if he is physically/emotionally/psychologically hurt by them. And "Yay!" is the all-time favorite expression of adults everywhere when children master something. I try to remind everyone not to say it to Jack and if they do I brace myself or try to rush over to Jack to cut the tears off at the pass. Sometimes that works but most times...

Please please please somebody out there on the world wide web, tell me a story to give me some hope. Did your child or you do this? What helped them/you get over it? All you sensory experts, are there exercises, desensitizing, anything that we can do to help Jack with this?

For more Wordless Wednesday and Special Exposure Wednesday links, click on the words.

They must have those little cars in all the Pump It Up's because they have one at the one we go to. Did he have fun? Our kids love it there. They always leave so sweaty!!

My kids love those cars too. Sorry I have no help with the singing Happy birthday / saying yay thing - Ashlea loves both those things. The only thing I could think of would be desensitisation - sing it low until he copes, then get slowly louder and louder etc. Could take ages but might be worth it in the end. Good luck!!

Aren't those indoor play places the best?
..
I worked with a little girl who cried when anyone would sing " happy birthday". We also would avoid it.
Lisa

He was having a great time in that car. I'm sorry that he has sensory issues with certain things. I wouldn't have thought a word like yay would set somebody off, but one never knows. Happy W/W!

I am Harriet said...

Have a great Wednesday!
http://iamharriet.blogspot.com/2009/11/have-you-been-to-ellis-island.html

Awww my nephews loved the car!! Looks like he had a super fun time!

Oh honey, bless his little heart!! I'd be right there crying with you, he looks like such a sweet little boy and it breaks my heart to see lil sweeties agonizing over something. Hopefully he'll grow out of that.

I bring many people to tears...sorry that one of them has to be Jack! :) I don't like the idea of using me for desensitization, though. If it doesn't work, he'll hate my guts!!!

Hi Marie! Found you through Alabama Bloggers...Glad to "meet" you. Hopefully I'll make it to the next meet-up, so maybe we can meet for real!

I think I cried the last time we went to an inflatables place, so I feel for Jack. ;)

Wherever HE Leads We'll Go said...

He is a cutie! I wish I had some advice about the sensory issues. My daughter has similar issues when she is in loud places. Breaks my heart!

Awww! Looks like Jack really loved that car! Glad he had fun! Sorry he has those sensory issues, wish I had some advice...hopefully it'll be something he eventually grows out of. ((HUGZ!))

Precious guy! I'm glad he had a fun time at Pump it Up (aside from the "Happy Birthday" tears). :( Wishing you and your family the best. :)

Thanks guys! Jack did have a great time with the bouncing. His awesome preschool teacher has some ideas to work on these sensitivities and I hope to be posting soon or eventually anyway that these issues have faded away.