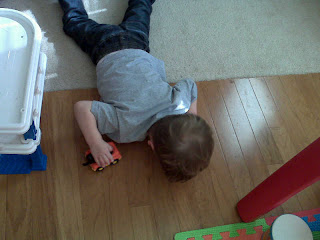 Just goes to show you if they're tired they'll sleep anywhere. Love how he still has the truck in his hand as he grows older that'll become the remote. lol

LOL, Kirsty. Funny thing is he wasn't asleep and did not nap or anything for hours after this picture. I think he is tired when he does this. He gets irritable if you try to move him from his spot but it's like he just does it until his second wind hits him. :) Oh to be that uninhibited and to be able to catch a second wind like that! :)

What a cute photo. I hope he got up refreshed and ready to go.

Oh yeah, he was refreshed Jennifer. After this we went outside and played with his little cousin for a couple of hours, he took a short nap on the way to get some food then we went to the park where he played on the playground then he rode his trike around the lake and...whew, 5 hours later we returned home. We never left our little town. Think we spent enough time outside yesterday?

Mwahaha! Last night my little boy fell asleep in his bowl of turkey chili BEFORE he had leftover b-day cake for desert. At least I got the meds down before he crashed and I had to haul him off to bed!