A couple of days ago I sent out an email asking everyone to pray for Jack. 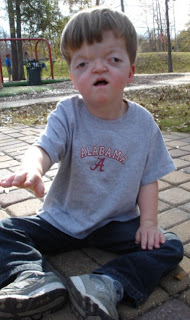 I thought that a medication he was taking was causing him to have hypersensitivies to sound. He had a complete meltdown when a toy he adores sang a song he adores. He sat there in joyful anticipation until the toy started singing.

Once it started, he made the face...if you ever see the face, you'll never forget the face, and you'll never want to see it again. It's the face of shock, of pain, of confusion...the face that occurs just before the gut wrenching, crying until he literally can't breathe and is getting choked on his secretions crying. It's awful and nothing helps. He looks so helpless as he cries out and in between sobs asks you to do things that usually comfort him but nothing helps until he is just exhausted from the effort and finally calms down. But afterward, little things can get him started again and it starts all over until at some point mercifully he gets to sleep.

Since I thought it was his decongestant/antihistamine/antitussive combination causing the problem, I stopped giving it.Turns out that was a bad idea since he actually had an ear infection but now I'm getting ahead of the story....without further ado, I present the Seven Dwarves of Ear Infection.....

This morning, I woke up to see 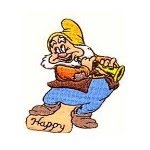 sitting up in his bed waiting for me to help him get his Bipap mask off. He was in an extraordinarily good mood. He was especially giggly this morning as he played with Elmo Live and I realized that he was actually repeating one of the jokes. As we got him ready for school, we practiced the joke so he could tell it to Ms. Sunny when he got to school.

When we arrived, Ms. Sunny and Jack's classmates were sitting together and talking. Jack became 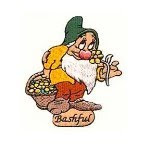 and had trouble getting the joke out but once he did everybody laughed and I heard some of the kids repeating it to each other. (Why is six afraid of seven? Because seven ate nine!)<--Remember, this is 4K. This kind of stuff is still funny to them.

Just before his scheduled lunch time, we got the call from school, Jack started acting 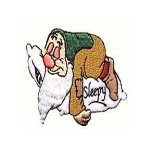 so they knew that something had to be wrong. He is not one of their sleepers.

They took his temperature and, sure enough, it was 101 degrees so we got the call to come get him.

When I arrived, Mr. Daniel and Ms. Sunny told me that he had been a little 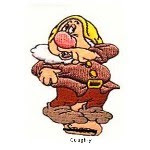 (I renamed this dwarf Cough-y) all morning. And sure enough, they pointed out the drainage seeping out his right ear. (ewww)

I took Jack home and he almost immediately 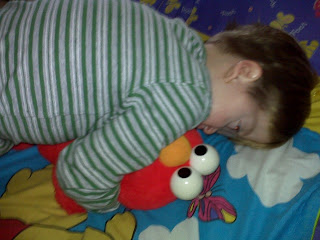 laid down with Elmo. 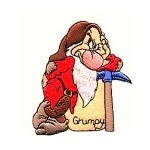 when he realized that he would be paying a visit to 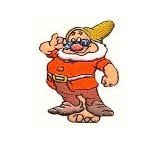 Cause: Constant sinus drip gets pushed back into ears by Bipap if not dried up using medication

Mom's reaction: DOH! What do I do?

That's when I felt 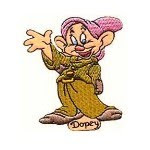 Our sweet family doctor took me quite seriously as I relayed Jack's hypersensitivity Sunday evening. You could tell by the look on his face that he understood and was not about to shrug off Jack feeling that way. He understood the problem too. We discussed the possibility that the hypersensitivity may actually have been caused by the ear infection.

Bottom line is that we really don't know and the only way to find out what is causing the problem is to experiment with different medications and see how Jack reacts. David and I talked it over and since he had been taking the new medication for a full week and a half and Dr. A thinks that it would only take 2-3 days of giving a medication to see a reaction, it was most likely the ear infection causing the hypersensitivity.

So...pray for us as we try to get the ear cleared up and the medicine sorted out.

Don't forget to check out the latest installment of Life is Therapy.

I hope he is feeling better soon. Ear infections are awful.

Awww poor sweet Jack. I sure hope he is feeling better soon. Love the way you did the seven dwarfs. You are a great writer. Funny too!
I will keep Jack in my prayers.

My middle son has extreme sensitivity to noise all the time. It's so frustrating. It doesn't stop him from being loud as can be, but he get overwhelmed by others' loud noises.

I will pray for your little Jack. That ear pain is really awful.

Ear infections are the worst. Hoping Jack is able to enjoy his favorite toy again......fast!

I love the way you did this post...awesome!!

Wherever HE Leads We'll Go said...

I used to get ear infections ALL the time when I was a kid - no fun at all. Hope he feels better soon!

Oh ear infections are terrible :( I hope he feels better soon and you find the medicine that works the best for him quickly.

Oh, I meant to say he looks so big in that first picture! I can't tell if he's taller or if his face has just matured, but he looks more like a boy than a toddler.

Poor guy! I hate the medication interaction thing. Pretty much all medications mess me up in one creative way or another.

But I must say...brilliant post! I love it - you're so creative!

Oh no. Poor thing. Definitely praying his ear infection gets cleared up. I thought that the way you presented this was both clever and enjoyable.

This was a clever way to tell your story Marie. I am SO SORRY that Jack is sick. I am praying for him.