This weekend is a big one for Jack's school. It's Mercedes Marathon Weekend. This is one of the biggest fundraisers that they have. Unfortunately, as you can see by our ticker, we did not reach our personal fundraising goal. I'd like to think that we would have made it if we'd had the kind of time that we planned on using for fundraising. Thanks again to everyone who so generously donated and thank you to everyone who may not have been able to donate but prayed for our efforts. Even though the race is over this weekend, fundraising efforts continue and you can still donate through Jack's Firstgiving page. Just click on the fundraising ticker on the left.

Race weekend starts off with a children's race at Jack's school. This year, I had a photographer so I was able to get a lot more pictures of the racing event (Thank you, Aunt Ninfa!).

Here's Jack at the starting line next to one of his schoolmates. Cute little Annaka was in Jack's class last year. 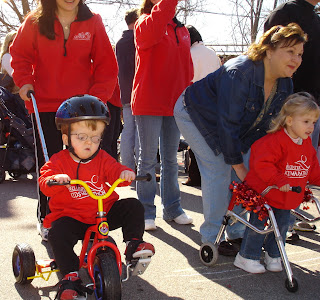 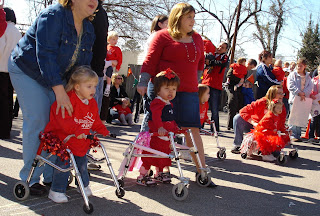 Look at that game face! He's ready to ride!!! [Actually he was kind of mad because he had to wear the helmet. We are being more conscientious about bike safety and making him wear a helmet even when he rides his tricycle. Dr. Price would be soooo proud!] 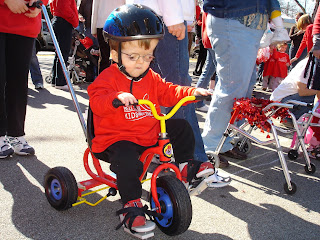 Here is part of Jack's cheering squad. The third girl from the right is Veronica. She made the sign that says "Go Jack Go!" Veronica and her class came to cheer on all the racers. Veronica's mom, my great friend Edie, and her sister Nell also came to cheer Jack on. 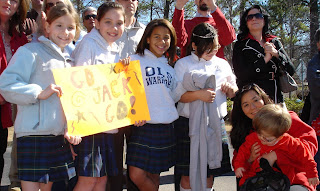 This is a sweet young man named Russell who made a poster to cheer Jack on. It says "You can do it. I know you can. You Rock! Go Jack! Win Win Win!" He did a great job! 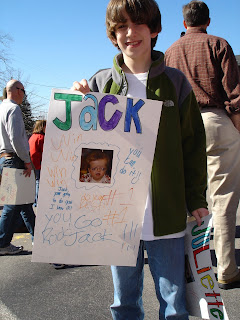 Wow, I just realized that I did not get a picture of Nana, Aunt Ninfa, and Mimi who also came out to cheer Jack on. Thanks for coming to the race, guys. It was nice to have all the support and help watching Jack while I got his trike and all.

Finally, here is Jack saying, "Let me go! I want to run wild!" I foolishly let go of his hand for a moment and few seconds later he bit the dust because he did not step up when he got to the sidewalk. It was a bad Mommy moment. 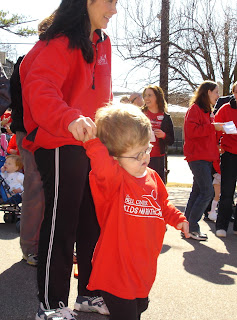 Fortunately, he seems to be just fine. He caught himself by throwing his arms out in front of him (Miss Melissa, I know you are proud of that!). He just has a little scratch on his forehead where he laid his head down on the pebbly sidewalk.

The Children's Race got some local news coverage and they happened to go live while Jack was racing. Here's a link where you can see a few seconds of Jack in action. The little girl leading the pack is Annaka. I can remember when they were trying to get her to crawl to the snack table last year. You'll also see Rachel who is a new walker. It is so exciting just to see her go. Bringing up the rear is precious Peyton who gets better and better at walking. She is actually progressing to using canes in the classroom. Jack's school does amazing things for these kids!

Jack, my sister in law Lisa, our friend Michele (if she is any better and I'm not sure she will be), and our friend Joy and I will be volunteering at the school's water table on marathon day so hopefully I'll be able to get a few pictures of that. Oh, also, if Steve is feeling better, he will be running on Jack's behalf so maybe I can get a picture of him running and post that too.